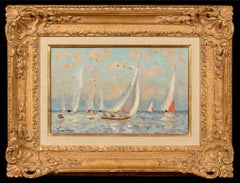 Chanel Pale Pink Raffia Large Deauville Clutch
By Chanel
Located in Dubai, Al Qouz 2
Chanel sure knows the path to your closet! This Deauville clutch has convenience written all over it. Designed from raffia, this clutch comes with a zip top closure that opens to a s...
Category

H 9.06 in. W 0.4 in. L 13.39 in.
Chanel Beige Leather Large Studded Deauville Tote
By Chanel
Located in Dubai, Al Qouz 2
Expertly designed, Chanel bags are coveted around the world. This Deauville tote is no different. Crafted in Italy, it is made from quality leather. It comes in a lovely shade of bei...
Category

H 12.21 in. W 7.49 in. L 17.72 in.
Chanel Pale Pink Raffia Large Deauville Clutch
By Chanel
Located in Dubai, Al Qouz 2
Chanel sure knows the path to your closet! This Deauville clutch has convenience written all over it. Designed from raffia, this clutch comes with a zip top closure that opens to a s...
Category

H 11.5 in. W 8.2 in. L 15 in.
Get Updated with New Arrivals
Save "Deauville Large", and we’ll notify you when there are new listings in this category.

Chanel Classic Deauville Large Metallic Gold Navy Blue Denim Tote Bag 2019
By Chanel
Located in Delray Beach, FL
Chanel The Deauville Tote Soldout in stores Navy with Gold Metallic threads running through This is the Large tote Purchased by me from the Chanel Boutique. Comes with Dustcover and ...
Category

H 9 in. W 13.5 in. D 1 in.
Chanel Deauville Tote Shearling Large
By Chanel
Located in NY, NY
Condition: Very good. Light wear on exterior, loss of shape and indentation on base, minor wear and scuffs on leather trims. Wear and marks in interior, scratches on hardware. Access...
Category

H 12 in. W 16 in. D 8 in.
Chanel Deauville Backpack Canvas Large
By Chanel
Located in NY, NY
Condition: Good. Odor in interior. Wear on exterior and in interior, darkening on base, scuffs and wear on leather trims, handle and strap. Heavy wear on drawstring, light cracking o...
Category

Deauville Large For Sale on 1stDibs

Find the exact vintage or contemporary deauville large you’re shopping for in the variety available on 1stDibs. If you’re looking for an option in Black and you’re unable to find the right fit, there are plenty of variations in Gray, Pink and more. You’re likely to find the perfect deauville large among the distinctive accessories we have available, which includes versions made as long ago as the 20th Century as well as those produced as recently as the 21st Century. There aren’t many items for men if you’re seeking these accessories, as most of the options available are for women and unisex.

How Much is a Deauville Large?

Prices for a deauville large can differ depending upon size, designer and other attributes — on 1stDibs, these accessories begin at $680 and can go as high as $26,000, while, on average they fetch $2,870.

Fashion of the 21st Century and Contemporary

Find an extraordinary range of authentic Hermès fashion available on 1stDibs. If you’re browsing our collection of unique vintage and designer fashion to elevate your daily look or to introduce new colors to the dazzling formal wear in your wardrobe, this designer’s body of work includes elements of red, blue, orange and other tones. Those who are interested in this designer might also find the work appealing. Find designer, vintage and haute couture Hermès fashion from top boutiques around the world on 1stDibs. On 1stDibs, the price for these items starts at $80 and tops out at $600,000, while the average work can sell for $4,025. .