H 78.5 in. W 25.5 in. D 16.5 in.
Midcentury Italian Nickel and Frosted Glass Bookshelf, circa 1960
Located in Chicago, IL
Midcentury nickel and frosted glass three-level bookshelf or étagère, Italian, circa 1960.
Category

H 37 in. W 47.5 in. D 15 in.
M. Matégot Rigitule, Glass Bookshelf Jardinière Library, Wall Mounted Sculpture
By Mathieu Matégot
Located in London, GB
Matégot is perhaps the last and most important metalsmith of the French after war era. Had incredible originality in his design. Always very poetic in his realization. Time to coll...
Category

H 78.75 in. W 47.25 in. D 13.78 in.
Mid-Century Modern Brass and Blacked Glass Bookshelf by Romeo Rega
By Romeo Rega
Located in Paris, FR
It features the beautiful detail of a structure made of gold-plated brass and glass inset shelves. The structure can hold 14 display shelves. The item is provided with a certificat...
Category 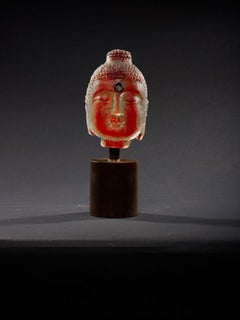 H 70.5 in. W 55 in. D 14.25 in.
Garsnas Mobler Bookshelf with Bar
By Gärsnäs Mobler
Located in Porto, PT
Walnut bookshelf with a central dry bar, inlaid figures in the door.
Category

H 30.5 in. W 28.5 in. D 14.5 in.
Midcentury Small Walnut Bookshelf or Cabinet
Located in Brooklyn, NY
This gorgeous vintage modern cabinet features a hidden drop front compartment on the bottom with a decorative knob. This versatile case piece offers plenty of room for storage and di...
Category

H 28.5 in. W 21.5 in. D 11 in.
Midcentury Brass and Chrome Open Bookshelf
Located in Los Angeles, CA
This midcentury brass and chrome open bookshelf is in great condition, comes with a symmetrical design and has been newly buffed and polished. The piece feature a brass and chrome fr...
Category

H 72.5 in. W 32 in. D 15 in.
BIS Bookshelf in Cherry Tree Veneer and Brown Glass by Benjamin Ossa-MOB Project
Located in London, GB
The BIS project for MOB seeks to be installed as a sort of island in space, accentuating its semi-translucent composition and operability on both sides of the furniture. In some way ...
Category

H 82.68 in. W 82.68 in. D 19.69 in.
Quantum Bookshelf, by Piero Lissoni for Glas Italia
By Piero Lissoni, Glas Italia
Located in Macherio, IT
Bookcases made of boxes of different sizes in transparent 10 mm extralight tempered glass, glued at 45° and deliberately overlapped in a misaligned and irregular way. Available with...
Category

H 55 in. W 43 in. D 16.5 in.
Danish Mid-Century Modern Étagère Bookshelf Cabinet Credenza
Located in West Hartford, CT
Danish modern étagère with iconic lines and the perfect scale for your home or apartment. Features sliding black glass at top. The possibilities are endless. Now, more than ever, ho...
Category

H 71.5 in. W 32 in. D 16 in.
Midcentury French Bookshelf in Mahogany by Meubles Minvielle
By Les Huchers-Minvielle 1
Located in Pasadena, CA
This midcentury French bookshelf features a glossy, mahogany frame, an open central display flanked by black glass sliding doors, and two lower cabinets with a set of drawers.
Category

H 77 in. W 84 in. D 15 in.
Bookshelf Structure Plywood Ebony Veneered Back in Vetrite with Strip Led
By sicis
Located in London, GB
Sicis is delighted to welcome you at ‘Home’. The classically inspired extent in contemporary plays an eclectic style, elegant and refined. Interiors express personality. A constant...
Category

H 88.59 in. W 43.31 in. D 13.78 in.
Bookshelf Structure Plywood Ebony Veneered Back in Vetrite with Strip Led
By sicis
Located in London, GB
Sicis is delighted to welcome you at ‘Home’. The classically inspired extent in contemporary plays an eclectic style, elegant and refined. Interiors express personality. A constant...
Category

H 35.44 in. W 66.93 in. D 14.57 in.
1930's French Art Deco Bookshelf Cabinet in the Manner of Chareau
By Pierre Chareau
Located in New York, NY
Designed in the manner of French Art Deco designer Pierre Chareau, this 1930's two section bookcase cabinet is composed of ebonized wood and features a top section with sliding glass...
Category

H 79.53 in. W 38.19 in. D 15.75 in.
Large Chrome and Glass Bookshelf Etageré
Located in Albano Laziale, Rome/Lazio
Extra large bookshelf in one unit. Has mirrored glass at the bottom and smoked colored glass shelves.
Category

H 79.53 in. W 64.57 in. D 13 in.
Goldscheider Vienna Girl with Book Sitting on a Bookshelf by Dakon, circa 1935
By Stefan Dakon, Goldscheider Manufactory of Vienna
Located in Vienna, AT
Very rare goldscheider Art Deco ceramic figurine. The girl with blond curly hair and a green bow in her hair, wearing a black and white checked dress, is sitting cross-legged on a l...
Category

Goldscheider Vienna Girl with Book Sitting on a Bookshelf by Dakon, circa 1935

H 26 in. W 73 in. D 16 in.
Midcentury Solid Lucite and Glass Bookshelf or Bookcase.
Located in New York, NY
A vintage sturdy bookcase or bookshelf made of Lucite with thick glass shelves.
Category

A Large Glass Side Table or Bookshelf, France 1970s

H 76 in. W 27.5 in. D 17.5 in.
Ico Parisi Magazine Stand/Bookshelf
By Ico Parisi
Located in East Hampton, NY
Total of three shelves (one glass) on a very sculptural shelving unit. This item is currently in our MIAMI facility. Please call or email us directly for details.
Category

H 70.87 in. W 81.89 in. D 15.75 in.
Craftsman-Style Bookshelf with Desk
Located in Pasadena, CA
This Craftsman-style, walnut bookshelf with desk features an elegant geometric construction complimented by exposed mortise and tenon joinery and brass brackets. A piece of clear or ...
Category

H 72.84 in. W 33.08 in. D 11.82 in.
Teak and Glass Door Bookshelf Console Cabinet Credenza by Dyrlund of Denmark
By Dyrlund
Located in Saint Petersburg, FL
Midcentury Scandinavian Modern Danish teak bookcase console cabinet credenza by Dyrlund. Made in Denmark, vintage 1970s, teak wood construction. The unit is finished on back side and...
Category

H 30.38 in. W 74.5 in. D 19.25 in.
Flame Mahogany Arch Top Cabinet / Bookshelf
Located in Pasadena, CA
An arch top display cabinet / bookcase in flame mahogany with a white upper interior and adjustable glass shelves. Flame mahogany doors to the base, circa 1940.
Category

H 90.25 in. W 37.25 in. D 13.5 in.
Italian Mid-Century Modern Bookshelf with Bar, 1950s
Located in Rome, IT
A rare multifunctional wall unit with wall unit and bar, manufactured in Italy in 1950s The big credenza has five compartments large and comfortable to use, including a bar, drawers...
Category

Glass Bookshelf For Sale on 1stDibs

Find many varieties of an authentic glass bookshelf available at 1stDibs. Each glass bookshelf for sale was constructed with extraordinary care, often using glass, metal and wood. If you’re shopping for a glass bookshelf, we have 28 options in-stock, while there are 7 modern editions to choose from as well. Whether you’re looking for an older or newer glass bookshelf, there are earlier versions available from the 19th Century and newer variations made as recently as the 21st Century. A glass bookshelf made by Mid-Century Modern designers — as well as those associated with Hollywood Regency — is very popular. A well-made glass bookshelf has long been a part of the offerings for many furniture designers and manufacturers, but those produced by Romeo Rega, Achille Salvagni and sicis are consistently popular.

How Much are Glass Bookshelf?

Prices for a glass bookshelf can differ depending upon size, time period and other attributes — at 1stDibs, they begin at $650 and can go as high as $73,857, while the average can fetch as much as $4,500.