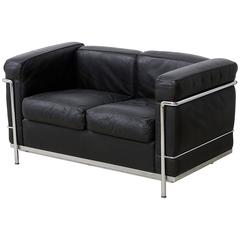 H 25.6 in. W 50.4 in. L 25.6 in.
LC3 Two-Seater Sofa by Le Corbusier for Cassina, Italy, circa 1980
By Cassina, Le Corbusier
Located in Amsterdam, NL
Beautiful LC3 two-seater sofa by Le Corbusier, manufactured by Cassina in Italy around 1980. This eye-catching sofa is upholstered in high quality leather and has a very recogniza...
Category

LC3 Two-Seater Sofa by Le Corbusier for Cassina, Italy, circa 1980

How Much are Lc2 Two Seats?

Lc2 two seats can differ in price owing to various characteristics — the average selling price at 1stDibs is $5,870, while the lowest priced sells for $1,930 and the highest can go for as much as $19,901.