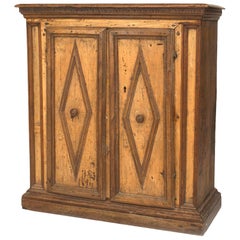 H 45 in. W 41.25 in. D 17.25 in.
Italian Renaissance Style Cabinet
Located in Great Barrington, MA
Small in size but impressive in the scale of its architectural moldings and details, this Italian Renaissance-style cabinet contains two shelves behind double panelled doors and a ce...
Category

H 35 in. W 26 in. D 15.5 in.
Italian Renaissance Style Cabinet
Located in Great Barrington, MA
Small in size but impressive in the scale of its architectural moldings and details, this Italian Renaissance-style cabinet contains two shelves behind double paneled doors and a cen...
Category

H 41 in. W 37.5 in. D 17.5 in.
18th Century Italian Renaissance Carved Walnut Wall Hanging Cabinet
Located in Dallas, TX
Crafted in Italy circa 1780, the cabinet is heavily carved with figure and floral motif. It features a central door opening to inside shelving. The Gothic style cabinet is in excelle...
Category

H 77.125 in. W 102 in. D 17.5 in.
Italian Renaissance Walnut Credenza
Located in Essex, MA
With old finish. Rectangular top with molded edge over a frieze with mounted corbels and a false drawer over a pair of cabinet doors with original handles all flanked by mask and flo...
Category

H 34.5 in. W 35.75 in. D 23.25 in.
Small Antique Walnut Wood Renaissance Style Cabinet from Italy, Late 1800s
Located in Dallas, TX
From Italy, this small antique walnut wood cabinet is in the Renaissance style and dates to the late 1800s. There are some particularly interesting motifs on this piece. Notice the t...
Category

H 50 in. W 61.5 in. D 25 in.
20th Century Oak Beech and Fruitwood Italian Renaissance Style Chest, 1950
Located in Vicoforte, Piedmont
Italian chest from the mid-20th century. Furniture carved in Renaissance style in oak, beech and fruitwood of beautiful lines and pleasant decor. Bench with door positioned in the up...
Category

H 44 in. W 73 in. D 23 in.
Renaissance Walnut Chest, circa 1600, Italy
Located in Brussels, Brussels
Superb Italian chest of the Italian renaissance in walnut from the end of the 16th century beginning of the 17th century, circa 1600 Very elegant rare chest from the North of Ital...
Category

H 24 in. W 63 in. D 18 in.
Credenza Sideboard Cupboard Walnut Italian Bologna Brass Studwork Renaissance
Located in Eversholt, Bedfordshire
This is a fine example of a Renaissance period credenza or sideboard that would have been made for an Italian Palazzo. The shaped moulded panels and brass studwork ornamentation are ...
Category

H 39.38 in. W 34.26 in. D 15.36 in.
Italian Renaissance Cassone Chest in Walnut, 17th Century
Located in Brussels, Brussels
Superb chest called cassone from the Italian Renaissance from the 17th century. Elegant chest from the North of Italy in walnut. The front of the chest is decorated with three ca...
Category

H 24.41 in. W 63.78 in. D 20.87 in.
17th Century Cabinet of Curiosities
Located in New Orleans, LA
Magnificent artistry, exotic materials and a bit of intrigue combine in this Italian Baroque-era cabinet of curiosities. Once a term used to describe entire rooms dedicated to humani...
Category

H 36.62 in. W 30.32 in. D 14.57 in.
Italian Renaissance Cassone Chest in Walnut, 17th Century
Located in Brussels, Brussels
Superb chest called cassone from the Italian renaissance from the 17th century. Elegant chest from the North of Italy in walnut. The front of the chest is decorated with three ca...
Category

How Much is a Renaissance Cabinet Italy?

The average selling price for a renaissance cabinet Italy at 1stDibs is $5,215, while they’re typically $1 on the low end and $398,500 for the highest priced.