H 36.62 in. W 27.56 in. D 16.54 in.
1960s, Teak Small Chest of Drawers
Located in Silvolde, Gelderland
Beautiful small chest of drawers made by Gyllensvaans Möbler, Sweden (marked). This chest of drawers is made of teak and has three drawers. It looks great with the black details an...
Category 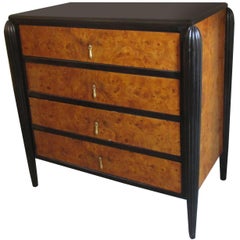 H 30 in. W 31 in. D 18 in.
English Small Chest of Drawers of Mahogany
Located in Austin, TX
A fine English small chest of mahogany, featuring a moulded top over a frieze of four drawers with brass pulls, each drawer with brass escutcheon, and set upon a serpentine apron wit...
Category

H 30.25 in. W 19 in. D 15.75 in.
Chippendale Style Oyster Veneered Small Chest of Drawers
By Thomas Chippendale
Located in Stamford, CT
A very handsome antique chest of drawers with stunning oyster veneer and pierced brass hardware. The perfect size for an apartment, or a wonderful and useful accent piece for any hom...
Category

H 30.25 in. W 32.5 in. D 16.25 in.
Antique Black Painted Small Chest of Drawers or Nightstand
Located in Round Top, TX
This small chest of drawers is quite dramatic thanks to the (newer) black paint that is gently distressed, accenting the Rococo curves and cabriole feet. The size makes it adaptable ...
Category

H 77 in. W 62 in. D 40 in.
Antique Rococo Small Chest of Drawers, Denmark circa 1890
By Mathias Ortmann
Located in Round Top, TX
The beauty of the wood, gilt, and curvaceous Bombay design of this small scale Rococo chest of 3 drawers combine for stunning impact. The design is in the style of Mathias Ortmann (c...
Category

H 26.78 in. W 27.56 in. D 13.78 in.
Hollywood Regency Small Chest of Drawers Made of Gold Lacquered Wood
Located in Doornspijk, NL
The little golden house of the Waltons... It's as if John-Boy personally left prints of his characteristic mole on the cheek. They are scattered all-over this small chest of drawers ...
Category

H 28 in. W 26 in. D 17 in.
Small Chest of Drawers in Walnut and Brass, France, 1960s
Located in Amsterdam, NL
Geometrical four-drawer chest in walnut and brass. It's definitely the solid legs that make this chest so interesting. Their geometrical shape is very well proportioned and a good ba...
Category

Small Chest of Drawers in Walnut and Brass, France, 1960s

H 29.93 in. W 31.5 in. D 18.51 in.
Filippo Perego Small Chest of Drawers for Jewellery, Italy, 1973
By Filippo Perego
Located in Milan, IT
A splendid Filippo Perego centre chest of drawers in faux tortoiseshell and brass. Reference: Casa Vogue. June 1973.
Category

H 19.49 in. W 23.82 in. D 18.12 in.
Midcentury Modern Design Oregon Pine Small Chest of Drawers 1970s
Located in Stow on the Wold, GB
Wonderful chest of drawers dating from the 1970s. Made from solid and veneered Oregon pine. The piece has four drawers that open with recessed handles. Lovely figurative grain to th...
Category

H 29.14 in. W 23.63 in. D 12.21 in.
Small Secretary/ Chest of Drawers
Located in Hudson, NY
Small oak secretary/chest of drawers, with carved gallery edge at the top. leather writing flap and inner shelves, lower part with 6 drawers with brass handles, key, circa 1880-1900.
Category

H 22.84 in. W 23.63 in. D 13 in.
Small Chest of Drawers in Oak, Late 17th Century, France
Located in Brussels, Brussels
Small French chest of drawers in light oak from the end of the 17th century-beginning of the 18th century Original entrances and locks Paneled sides In superb condition and very b...
Category

H 28.75 in. W 25.6 in. D 15.75 in.
Danish Empire Small Chest of Drawers with Satinwood Inlays of Resting Lion
Located in Miami, FL
A very lovely Empire chest with three drawers in mahogany with satinwood inlays of resting lion and foliage. Denmark, circa 1815. This uniquely Danish design in regard to scale, prop...
Category

H 31.46 in. W 40.16 in. D 20.48 in.
Small, Oak Jacobean Chest of Drawers
Located in Woodbury, CT
Three magnificently paneled drawers define the front of this three-drawer chest in quarter sawn and straight grain oak. Each drawer panel is flanked by split balusters and the chest ...
Category

H 30 in. W 36.5 in. D 22 in.
Samoa Small Chest of Drawers in Wood by Roberto Cavalli Home Interiors
By Roberto Cavalli
Located in Cantu, IT
The impressive Samoa chest of drawers lends the entire bedroom an irresistible contemporary charm. With its irregular shape that recalls the shapes of nature, this original piece of ...
Category

H 35.44 in. W 59.06 in. D 20.87 in.
Small Mahogany Serpentine Chest of Drawers
Located in Woodbury, CT
This diminutive Edwardian serpentine chest has four long drawers with brass knobs and rests on wide splay feet. Though it could be mistaken for a much older antique, it is still rela...
Category

Small Chest Of Drawers For Sale on 1stDibs

How Much are Small Chest Of Drawers?

Finding the Right Commodes Chests Of Drawers for You