H 33 in. Dm 23 in.
Italian Six-Light Brass and Glass Chandelier with Opaque White Globes, Stilnovo
By Stilnovo
Located in Chicago, IL
An iconic Italian chandelier by Stilnovo with the glass globes descending in a pattern down the central brass pole. Restored and rewired. All original glass globes. Overall dime...
Category

H 26.38 in. Dm 18.12 in.
Italian Six-Light Brass and Glass Chandelier with Opaque White Globes
By Stilnovo
Located in Chicago, IL
An iconic Italian chandelier in the style of and attributed to Stilnovo with the glass globes descending in a pattern down the central brass pole. Restored and rewired. The brass h...
Category

H 32 in. Dm 11 in.
Italian Light Pendant with White Glass Opaline Adjustable by Stilnovo, 1950s
By Stilnovo
Located in Traversetolo, IT
Superb light pendant designed by Stilnovo in the 1950s. The oval brushed satin glass diffuser is suspended from a steel wire, and the small brass knob placed on top on the black met...
Category 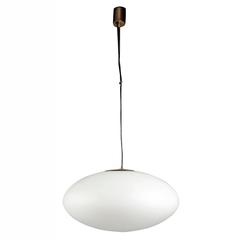 H 47 in. Dm 21 in.
Rare Stilnovo Nine-Light Triangular Chandelier, circa 1950
By Stilnovo
Located in London, GB
Rare Stilnovo ceiling light in brass with nine opaline shades Re wired for Europe and USA.
Category

How Much is a Stilnovo White Glass Pendant Light?

The average selling price for a stilnovo white glass pendant light at 1stDibs is $3,300, while they’re typically $920 on the low end and $15,039 for the highest priced.