Alessandro Bruschetti was a painter of the Futurism movement. He studied at the Art Institute and the Academy of Fine Arts of Perugia. Bruschetti followed the Roman courses of the Institute for Restoration in 1932 and kept into contact with Gerardo Dottori. Also, in that period, one of his first works, Dinamismo di cavalli, was noticed by Filippo Tommaso Marinetti, who opened the doors of the futurist movement to him. In 1941, together with Dottori, Bruschetti signed the Umbrian Manifesto of Aeropainting. He then moved to Brugherio and proposed an anthological exhibition in 1975 at the Museum of Science and Technology in Milan.

Related Items
The Toaster - Original Oil and Tempera on Wood - 1991
By Gianni Cacciarini
Located in Roma, IT
Category 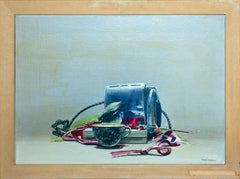 Still Life of Bouquet in two-handled vases - Oil on Panel by Vincenzo dé Fiori
Located in Roma, IT
Category 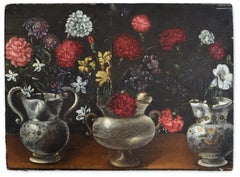 Still Life - Original Oil on Board by E. Ladell - 1870 ca.
By Edward Ladell
Located in Roma, IT
Category