Often heralded as the “Jeweler to the Stars,” as one of the first to recognize the branding power of lending glitzy pieces of fine jewelry for red-carpet events, Harry Winston is known for his eye for fine gemstones. It’s a reputation that extends to the celebrated engagement rings that have long emerged from his international salons.

At the end of the Great Depression, De Beers Consolidated Mines had been focusing their marketing efforts on generating consumer demand for diamonds. So they contracted the Philadelphia agency N.W. Ayer & Son to build an advertising campaign that emphasized a tangible connection between diamonds and romance. At the time, diamonds were considered a luxury purchase and people were generally disinterested in them anyway, but with the support of N.W. Ayer’s laser-focused print and radio strategy — and later, its “A diamond is forever” tagline — young men across the United States soon became convinced that diamond engagement rings were critical to a successful courtship. For women meanwhile, the link between diamonds and the emotional bond of marriage had been solidified. Diamond sales skyrocketed, and De Beers was successful in ultimately rendering diamonds a must-have for Americans considering popping the question.

Harry Winston had already garnered acclaim for his talents by the time the diamond engagement ring had taken center stage thanks to De Beers’s changing social attitudes about the precious stone. He opened Harry Winston Inc. in 1932 and acquired the 726-carat uncut Jonker diamond in 1935. In 1944, he became the first jeweler to dress an Oscar nominee when he loaned diamond jewelry to Jennifer Jones for the Academy Awards ceremony.

Winston is said to have favored emerald-cut diamonds because of how the wide facets generously flatter the stone, prioritizing its clarity in a classic platinum ring setting. On 1stDibs, browse stunning Harry Winston engagement rings by stone, stone cut and more. For help in finding just the right ring, visit our engagement ring buying guide.

Harry Winston the One Round Brilliant Diamond Micropavé Platinum Ring US 4.25 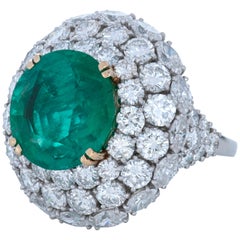 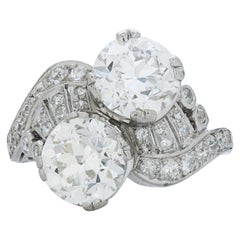