Nell Brinkley was a well-known newspaper artist whose drawings of elegant women influenced fashions in America for nearly 30 years.

Born in Denver, Brinkley began her career as an illustrator at the age of 15, working briefly for The Denver Post, a small local newspaper. After a year of night classes in life drawing, she began working for The Denver Times, producing romantic drawings for which she is credited as being the first such newspaper artist. She had been there for only one year before she received an offer to work for the King Features Syndicate in New York, the comics division of William Randolph Hearst’s newspaper empire, where she remained for 31 years until her retirement in 1938. Thereafter, she illustrated books. Most of her work, consisting of both illustrations and theater reviews, was done for the New York Evening Journal, a daily newspaper founded by Hearst in 1895. The Evening Journal was the first daily publication to run a full page of comics, and Brinkley was the featured artist. Through the King Features Syndicate Brinkley’s work was reproduced in publications throughout the world, including Harper’s and Cosmopolitan. Brinkley lived in New Rochelle, New York, where she was a member of the New Rochelle Art Association. She died in New Rochelle in 1944, and was buried in Denver.

At the Journal, Brinkley worked closely with editor in chief Arthur Brisbane, an influential publishing figure who later acquired and sold to Hearst The Washington Times. Brisbane provided the subjects for many of her illustrations. Together they produced such popular weekly serials as “Betty and Billy — and Their Love Through the Ages.” Brisbane also called upon Brinkley to illustrate contemporary sensational news topics. She covered several famous murder trials, including that of Harry K. Thaw, Stanford White’s murderer.

However, it is Brinkley’s swooping line drawings of slim, coquettish young women in the latest fashions, reminiscent of Aubrey Beardsley, that were the bread and butter of her career. Attesting to her popularity is a song titled “The Nell Brinkley Girl,” written in 1908:

Have you seen the newest girl

With her hair all in a whirl

As if the breezes gave her a kiss

With her pretty tilted nose

And her mouth just like a rose? There’s a girl you must not miss

I’ve a certain air and style

And I wear the smartest clothes

If the wind allows I don’t mind

And I’m really quite resigned

If I show my silken hose

(Harry B. Smith, with music by Maurice Levi, “The Nell Brinkley Girl” [1908]; available in the Hirschl & Adler artist archives.)

Brinkley frequently based her illustrations on mid-19th century newspaper cartoons of women, juxtaposing them with drawings of contemporary women and writing accompanying text comparing the two. Produced in a time of immense social change, Brinkley’s girls remain a visual record of the public debate over the changing roles of women in society. In a 1933 editorial, two of Brinkley’s drawings of girls in bathing suits, one styled after the bathing suits of the 1860s, the other contemporary, were used as a guide for moral behavior:

If any young woman wants to form an opinion concerning the mental processes and moral standards of some young man, let her show him these two pictures and ask: “What do you think of them?” If he thinks the [first drawing], in the old-fashioned bathing suits, ridiculous, and the [second], with girls largely undressed, exactly as they should be, the young woman may feel justified in being a little thoughtful, even suspicious. . . .In other words, MODESTY, in the real sense of the word, a shrinking from the gaze of others, a RESERVE that withholds much of its charm for sacred intimacy, has not entirely gone out of fashion. (New York Evening Journal, June 26, 1933, Editorial Page)

However, Brinkley’s girls are often simply humorous characterizations. Whether they are primping themselves for a night on the town, acting out a Prince Charming fantasy, modeling the latest fashionable hat or expressing horror at the sight of a gray hair, the women in Brinkley’s drawings are droll depictions of the complexities of the modern woman. 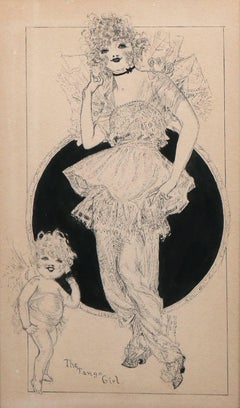 Three Stages of Life
By Nell Brinkley
Located in Minneapolis, MN
An original pen and ink drawing from one of the premier female figures of the "Golden Age of American Illustration" that appeared originally in the William Randolph Hearst publicatio...
Category 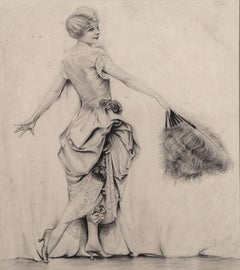 Lest We Forget
By B. Cory Kilvert
Located in Minneapolis, MN
Category

The Sound and the Fury - Pt II
By Steven Stroud
Located in Minneapolis, MN
Category

Louise Rainer in A Kiss For Cinderella
By James Montgomery Flagg
Located in Minneapolis, MN
Category

James Montgomery Flagg
Louise Rainer in A Kiss For Cinderella, 1942

H 10.75 in. W 20.25 in. D 1 in.
Success
By Nell Brinkley
Located in Minneapolis, MN
In this fun and detailed published pen & ink illustration, an arch of beautiful Brinkley girls hover over a young man who sludges through the trials of life: childhood, school, highe...
Category

H 14.5 in. W 20 in.
If All the World and Love Were Young
By Nell Brinkley
Located in Minneapolis, MN
In this fun and detailed published pen & ink illustration, an ethereal Brinkley beauty finds herself enchanted by the musical renderings of her guitar-playing suitor during a moonlit...
Category

Nell Brinkley
If All the World and Love Were Young, 1920s