Matella Small Sideboard
By Da A
Located in Milan, IT
Boasting an elegant honey-copper finish, this splendid piece of functional decor is a small sideboard composed of one door. Exquisitely crafted of steel, the piece boasts curved side...
Category 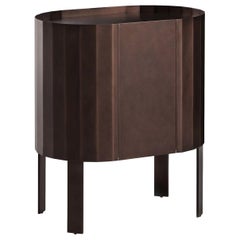 H 27.56 in. W 23.63 in. D 15.75 in.
Small Italian Sideboard in Black Wood, circa 1930
Located in London, GB
An original small Italian sideboard in ebonised wood. The handles are in Murano glass with gold inclusion attributed to Barovier & Toso. The sideboard has been repainted, top shows s...
Category

Small Antique Black Painted English Buffet or Sideboard
Located in Round Top, TX
This delightful, hand carved English oak server has been given a gently distressed black painted finish, adding to the vintage character of the sideboard. The unusual configuration a...
Category

H 38.78 in. W 52.56 in. D 18.12 in.
Small French Black Lacquered Art Deco Sideboard with Mirrored Display Cabinet
Located in Salzburg, AT
French Art Deco sideboard with highgloss black finish and nickelded metal details in attractive small size. The base of the furniture is out of solid oak representing firm workmanshi...
Category

H 35.44 in. W 47.25 in. D 17.72 in.
Small Early 20th Century French Metal Sideboard Locker
Located in Amsterdam, NL
Great and original locker with beautiful patina. Untouched interior. Great to use as a sideboard, France, circa 1900-1940. Weathered but in this case it's a plus.
Category

H 33.27 in. W 72.05 in. D 18.31 in.
Small Brutalist Sideboard in Black Oak, Belgium, 1970s
By De Coene
Located in Echt, NL
Black brutalist sideboard in very good condition. Made in Belgium in the 1970s This sideboard has two doors made of massive black stained oak, each with a three-dimensional patte...
Category

H 30.71 in. W 41.15 in. D 17.72 in.
De Coene Small Sideboard or Bar Cabinet in Black Stained Oak, 1970s
By De Coene
Located in Ghent, BE
This small sideboard with geometric doors is executed by De Coene., Belgium in the 1970s. The credenza shows a pyramid like pattern on its doors. The squares on the front are each di...
Category

H 31.5 in. W 39.38 in. D 20.87 in.
Minimalist Art Deco Style Black Laminate and Brass Oval Small Sideboard Cabinet
By Mastercraft
Located in Ft. Lauderdale, FL
The small size makes this sideboard or credenza very versatile. It can be used as an entryway console, home bar or traditional credenza. It is shaped with rounded ends and two doors ...
Category

Spectacular Italian Louis XVI Style Inlaid Walnut Sideboard with Bar Cabinet
Located in Casale Monferrato, IT
Elegant sideboard in precious inlaid walnut 1930s. This sideboard is characterized by a refined inlay work with neoclassical decorations. Beautiful with flowers decorate each side of...
Category

Sideboard by Ernest Boiceau, France, circa 1930

US$6,500
High Sideboard, Dry Bar in High Gloss Italian in Style of Paolo Buffa, 1960s
By Paolo Buffa
Located in Antwerp, BE
Beautiful high quality of Italian design. Made entirely of precious lines in wood, the furniture is a masterpiece of imperious elegance. 1960's Dry-Bar in style of Paolo Buffa. High ...
Category

US$3,500
Black Art Deco Sideboard Made in Czechia in the 1930s, Fully Restored
Located in Horomerice, CZ
Functionalism dining set - Sideboard in black polish with integrated lighting dispay-cabinets and hanging cabinet on the wall. Chrome pedestal is convexly curved, but the door is con...
Category

Black Art Deco Sideboard Made in Czechia in the 1930s, Fully Restored

US$11,169
Orum Mobler Denmark Contemporary Solid Ashwood Sideboard Cupboard with Drawers
By Ørum Møbler
Located in GB
We are delighted to offer for sale this original Orum Mobler solid Ash sideboard with drawers Please note the delivery fee listed is just a guide, it covers within the M25 only ...
Category

US$8,500
Italian Mid-Century Sideboard Cabinet Bar with Mirror by Luigi Brusotti, 1940s
By Luigi Brusotti
Located in Traversetolo, IT
Spectacular and rare cabinet bar or sideboard equipped with a decorated mirror, designed in Italy by Luigi Brusotti in the 1940s. High-quality execution is guaranteed. The front is e...
Category

US$3,191 Sale Price
40% Off
Bohemian Functionalist Walnut Sideboard, 1930s
Located in Prague 8, CZ
Bohemian functionalist glazed sideboard in walnut veneer. It was made in the 1930s. It features a very simple and practical design. Standing on a massive rectangular base. Consists o...
Category

How Much is a Small Black Sideboard?

Finding the Right Sideboards for You