Georgi Todorov Chapkanov was born on January 24, 1943 in Valchi Dol, Varna district. She graduated from the Art School in Sofia and the Higher School of Fine Arts "Nikolay Pavlovich" in Sofia, specializing in "Sculpture". Chapkanov is a Professor at the Art Academy, Head of the Department of Art Processing of Metal, Creativity Statue of Sofia. His works are exhibited at the Hermitage in St. Petersburg, the Pushkin Museum in Moscow, the National Art Gallery, the Sofia City Art Gallery, the building of the International Olympic Committee in Lausanne and others. Co-authored by the Republic of Bulgaria's coat of arms, he is the author of the "Statue of Sofia" in the capital. He is also author of many coins and medals, and has made portraits of some of the most famous personalities. He has won the following awards: the Union of Bulgarian Artists for Portrait, Golden Aesop, Marko Markov of the Union of Bulgarian Artists of the Hakone Museum in Japan for the perfection of the Hakone Museum, the triennial of fine arts in New Delhi Sulmon of the President of Italy Grand Prix in Paris.

The Fisherman
By Georgi Chapkanov
Located in Sofia, BG
Category 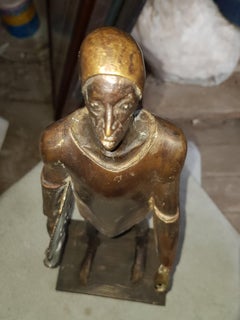 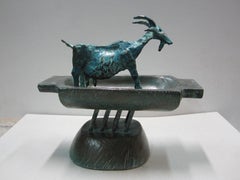 The Guardianship
By Stasys Zirgulis
Located in Sofia, BG
Category

The Mist
By Stasys Zirgulis
Located in Sofia, BG
Category