Swedish Modern Cabinet in the Style of Axel Larsson, 1940s 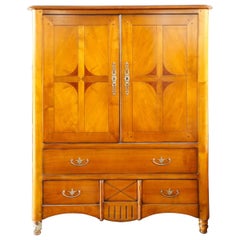 H 28.5 in. W 62 in. D 18 in.
EBONIZED Birch Cabinet/Commode
Located in Hawthorne, CA
Painted and ebonized ribbed birch 4-drawer commode/case piece, or cabinetry on tapered, round legs, circa 1930. Although the artist is unknown, this piece was purchased from one of t...
Category

H 72 in. W 80.75 in. D 28.5 in.
Scandinavian Mid-Century Modern Hand-Painted Birch Cabinet, 1960s
Located in Warszawa, Mazowieckie
This modernist, high cabinet was made in Scandinavia in the 1960s. The cabinet has been finished with birch with an irregular, strong and intricate grain and a brown-earth color. Thi...
Category

H 56.7 in. W 43.31 in. D 13.39 in.
Mid-20th Century Burr Birch Cabinet by Bodafors
Located in Debenham, Suffolk
Fine quality 1 piece cabinet by smf bodafors circa 1940. Double door cabinet with a partially fitted interior of drawers and shelves divided by a central partition. Below which ar...
Category

H 33.50 in. W 72 in. D 18 in.
1960s Four-Drawer Cabinet by Alvar Aalto for Artek
By Alvar Aalto, Artek
Located in Sagaponack, NY
A birch cabinet resting on a recessed plinth base with four (4) drawers that lock and have integrated pulls. Designed in the 1940s and produced for decades, this cabinet was likely p...
Category

H 52 in. W 32 in. D 20 in.
Swedish Art Deco Birch and Mahogany Cabinet
Located in Kramfors, SE
Swedish Art Deco cabinet with an exterior in veneered light birch and with an interior of mahogany. The interior has one shelf and 2 thin drawers with the rich mahogany color contras...
Category

H 106.3 in. W 23.63 in. D 94.49 in.
Clover Contemporary Sculpture Cabinet, Birch Wood, Jade Silvered Glass Doors
By Sabrina Landini
Located in Pietrasanta, IT
This cabinet object is a contemporary piece, made entirely by hand in Tuscany Italy, 100% of Italian origin. The body is made of multilayer wood, internally covered with a natural...
Category

H 76.58 in. W 24.61 in. D 15.75 in.
Alvar Aalto for Artek, Vintage Desk Cabinet with Drawers in Birch, 1950s
By Alvar Aalto
Located in Odense, DK
Charming vintage desk module "model 296" by Alvar Aalto. Cabinet mounted on wooden castors. Five drawers and shelves to the back. Early edition made at Artek in the 1950s. Later pain...
Category

H 25.99 in. W 14.97 in. D 20.48 in.
Biedermeier 1840s Birch Bow Front Cabinet with Bronze Capitals, Drawer and Door
Located in Atlanta, GA
An Austrian Biedermeier period bow front demilune cabinet from the mid-19th century, with semi-columns and bronze capitals décor. Born in Austria during the first half of the 19th ce...
Category

H 35.5 in. W 38.5 in. D 15 in.
Russian Karelian Birch Mirrored Vitrine or Cabinet
Located in Milford, NH
A fine example of a Russian Karelian birch veneered vitrine with molded cornice top over two open upper shelves with mirrored back, supported by two front columns, over a lower case ...
Category

H 24.3 in. W 71.25 in. D 16.25 in.
Impressively Scaled Swedish Birch Bookcase or Armoire
Located in New York, NY
Featuring stunning golden-hued birch with a lively figure and original hardware. This piece can be used for display of objects or books with the glass panels set into the doors or ex...
Category

H 33.47 in. W 52.37 in. D 16.93 in.
Perforated Large Storage Box, Solid Birch Wood Perforated Box by Erik Olovsson
By Erik Olovsson
Located in Stockholm, SE
Wooden storage box made in holed solid birch wood. Large holes creates a distinct graphic look and allows light to flow through. The boxes are light and easy to hold. They work both ...
Category

H 12.8 in. W 15.75 in. D 15.75 in.
Perforated Small Low Storage Box, Birch Wood Perforated Box by Erik Olovsson
By Erik Olovsson
Located in Stockholm, SE
Wooden storage box made in holed solid birch wood. Large holes creates a distinct graphic look and allows light to flow through. The boxes are light and easy to hold. They work both ...
Category

H 6.89 in. W 15.75 in. D 15.75 in.
Perforated Medium Storage Box, Solid Birch Wood Perforated Box by Erik Olovsson
By Erik Olovsson
Located in Stockholm, SE
Wooden storage box made in holed solid birch wood. Large holes creates a distinct graphic look and allows light to flow through. The boxes are light and easy to hold. They work both ...
Category

H 27.75 in. W 48.5 in. D 11.5 in.
Swedish Birch Armoire Hand Carved
Located in Hollywood, FL
This is a hand carved Swedish birch armoire. Its has incredible carved handles on each drawer, and the handle on the door is OMG. its a 2 piece, upper and lower.
Category

Birch Cabinets For Sale on 1stDibs

There is a range of birch cabinets for sale on 1stDibs. The range of distinct birch cabinets — often made from wood, birch and metal — can elevate any home. Find 1797 antique and vintage birch cabinets at 1stDibs now, or shop our selection of 39 modern versions for a more contemporary example of this long-cherished furniture. Birch cabinets have been produced for many years, with earlier versions available from the 18th Century and newer variations made as recently as the 21st Century. Mid-Century Modern, Art Deco and Scandinavian Modern birch cabinets are consistently popular styles. Birch cabinets have been a part of the life’s work for many furniture makers, but those produced by Paul McCobb, Winchendon Furniture (Planner Group) and Cees Braakman are consistently popular.

How Much are Birch Cabinets?

Birch cabinets can differ in price owing to various characteristics — the average selling price at 1stDibs is $3,639, while the lowest priced sells for $200 and the highest can go for as much as $148,000.

Questions About Birch Cabinets
Prices for most birch cabinets on 1stdibs are negotiable. You’ll see a "Make an Offer" button on the item details page, indicating that the seller is willing to consider a lower price. It’s not uncommon for customers to get 15–25% off the list price after negotiating. See our tips for negotiating like a pro.
Only experienced, professional sellers who have applied and been thoroughly vetted by our team of experts can sell birch cabinets and other quality items on our site. Learn more about becoming a 1stdibs seller.
The 1stdibs Buyer Protection Guarantee provides coverage for qualified purchases in the unlikely event that the item arrives not as described or is damaged. We’ll work with you and the seller to find a resolution, ensuring your satisfaction. View details
We have partnerships with the world's best shipping providers to facilitate seamless and fully-insured delivery from the seller's location directly to you, wherever you are in the world. Our logistics team is comprised of dedicated members who arrange all the details with our partners, servicing and supporting all shipments. Learn more about shipping on 1stdibs.
For your convenience, we offer multiple payment methods, including all major credit cards and PayPal. For many purchases we also offer financing options or wire transfer. Learn more about payment options on 1stdibs.