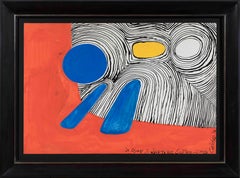 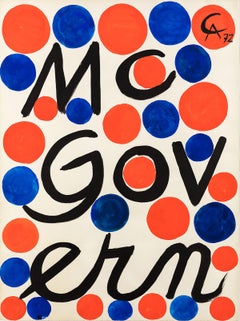 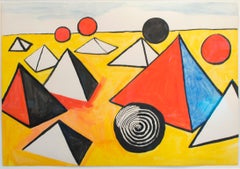 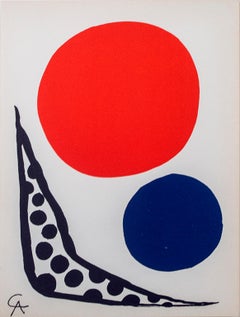 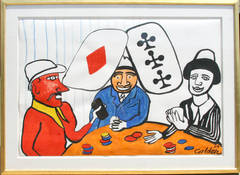 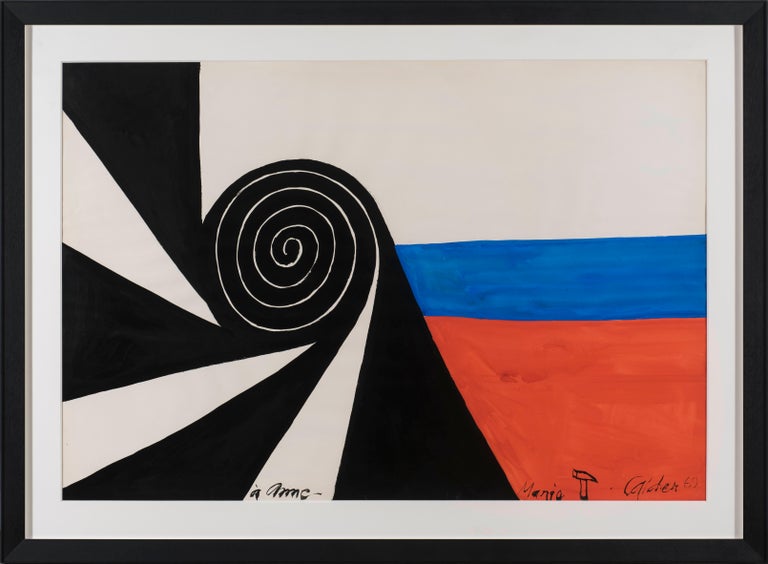 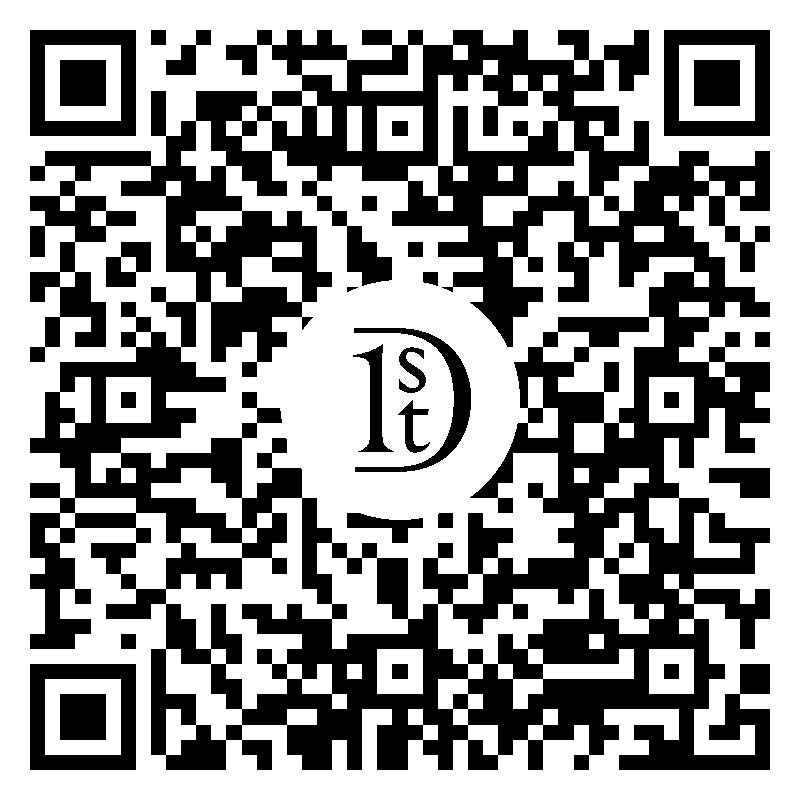 Gouache and ink on paper 75 x 110 cm (29 ½ x 43 ¼ inches) Signed and dated lower right, Calder 1969 Dedicated lower middle and lower right à Anne – Marie with an illustration of a hammer Provenance Studio of the artist, Saché, France Anne-Marie Marteau, Tours, France, gifted from the artist Private collection, thence by descent This work is registered in the archives of the Calder Foundation, New York, under the application number A27972. Alexander Calder was born in 1898 in Philadelphia, the son of Alexander Stirling Calder and grandson of Alexander Milne Calder, both well-known sculptors. After obtaining his mechanical engineering degree from the Stevens Institute of Technology, Calder had various jobs before enrolling at the Art Students League in New York City in 1923. Calder is renowned for developing a new idiom in modern art - the mobile. His works in this mode, from miniature to monumental, are called mobiles (suspended moving sculptures), standing mobiles (anchored moving sculptures) and stabiles (stationary constructions). Calder's abstract works are characteristically direct, spare, buoyant, colourful and finely crafted. He made ingenious, frequently witty, use of natural and manmade materials, including wire, sheet metal, wood and bronze. In June 1926, Calder moved to Paris. He took some classes at the Academie de la Grande Chaumiere and made his first wire sculptures. Calder created a miniature circus in his studio; the animals, clowns and tumblers were made of wire and animated by hand. Many leading artists of the period attended, and helped with, the performances. Calder's first New York City exhibition was in 1928, and other exhibitions in Paris and Berlin gained him international recognition as a significant artist. A visit to Piet Mondrian's studio proved pivotal. Calder began to work in an abstract style, finishing his first non-objective construction in 1931. In early 1932, he exhibited his first moving sculpture in an exhibition organized by Marcel Duchamp, who coined the word "mobile." Calder’s kinetic works range from being suspended and anchored, and are often monumental in size; he describes their performative element as “dancing in front of you”. Calder compared his stationary sculptures, dubbed ‘stabiles’ by Jean Arp, to traditional paintings as they simply imply movement. His exploration of motion in art began with using motors, but soon Calder used air-currents alone, creating movement he described as occurring "by nature and chance." The subtle, continuous movement of the suspended forms redefine the negative space around their abstract forms. In May 1932, Calder's fame was consolidated by the first United States show of his mobiles. Some were motor-driven, His later wind-driven mobiles enabled the sculptural parts to move independently, as Calder said, "by nature and chance." Calder returned to the United States to live and work in Roxbury, Massachusetts in June 1932. From the 1940s on, Calder's works, many of them large-scale outdoor sculptures, have been placed in virtually every major city of the Western world. In the 1950s, he created two new series of mobiles: "Towers," which included wall-mounted wire constructions, and "Gongs," mobiles with sound. In addition to his renowned sculptural compositions, Calder also produced a wealth of drawings, oil paintings, watercolours, and gouache throughout his artistic career. He commenced his study of printmaking when he moved to Paris, and he proceeded to illustrate for books and journals. As Calder's sculptural oeuvre shifted towards abstraction in the mid-1930s, his prints followed suit; colourful, geometric shapes predominate his works of this time. Today, Calder’s works inhabit many major cities in the world, including many large-scale outdoor sculptures. Calder died in 1976.