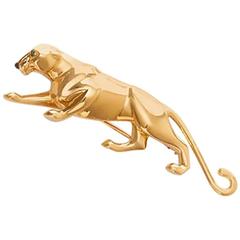 W 1.38 in. D .5 in. L 2.94 in.
Cartier Emerald 18 Karat Yellow Gold Elephant Family Brooch
By Cartier
Located in Southampton, PA
The Elephant Family design from the house of Cartier is always in style. This brooch is made of 18K yellow gold and displays a family of elephants walking in a procession line. Lastl...
Category

Cartier Emerald and Diamond Spider Pin in 18K Gold
By Cartier
Located in Houston, TX
Cartier spider pin composed of 18K yellow gold with emeralds and diamonds. The pin is marked "Cartier" on the back. The body holds eleven round emeralds that total 1.20 carats. Th...
Category

W 0.5 in. L 2 in.
Vintage Cartier Emerald and Ruby Lacquer 18 Karat Gold Ring, circa 1991
By Cartier
Located in Zurich, Zollstrasse
A Cartier true work of art. 18 K yellow Gold ring set to the front with carved emerald leaves and round ruby cabochons. All bezel set on a field of black lacquer. Fully signed Cart...
Category

L 17 in.
Cartier Diamond Emerald Elephant Brooch
By Cartier
Located in New York, NY
A charming brooch by Cartier designed as a mother and baby elephant, each comprised of 18k yellow gold, entirely pave set with round brilliant-cut diamonds. Each elephant head is ado...
Category

Cartier Gem Emerald Bird Ring
By Cartier
Located in New York, NY
This emerald is 4.6 carat and is from Colombia. This is a vintage emerald from the 1920 era featuring an engraved bird motif. This ring is certified by AGL-GUBELIN-SSEF clarity insi...
Category

Dm 1.5 in.
Cartier Diamond and Emerald Double Clips
By Cartier
Located in New York, NY
A pair of clip brooches dating from the 1960s with a gorgeously complex configuration of diamonds and two emeralds mounted in platinum signed Cartier. measures approx. 1.75" in leng...
Category

L 30.5 in.
Cartier Panthère de Cartier White Gold Diamond Emerald and Onyx Ring
By Cartier
Located in New York, NY
Authentic Cartier ring from the Panthère de Cartier collection centering on a single panther, an iconic symbol of the house. The ring is crafted in 18 karat white gold and set with a...
Category

Cartier Diamond Cabochon Ruby Emerald Platinum Necklace Suite
By Cartier
Located in New York, NY
An exceptional suite by Cartier that dates back to the 1960s, comprising a necklace, bracelet, and matching ear clips, all of a similar design. Each piece is crafted with cabochon ru...
Category

Cartier Panthere Emerald 18k White Gold Lakarda Ring
By Cartier
Located in New York, NY
Fine 18K white gold and emerald ring from the "Lakarda" Panthere collection by Cartier. It resembles a panther head. Because of the slight flexible nature, it can be worn from a size...
Category

Free Shipping
Cartier Tri-Colour Onyx and Emerald Panthere Ring
By Cartier
Located in London, GB
A beautiful 18k tri-colour gold panthere ring by Cartier from the Panthere collection. The ring is composed of a panthere head motif and is complemented with two round emeralds set a...
Category

Cartier Tri-Colour Onyx and Emerald Panthere Ring
By Cartier
Located in London, GB
A beautiful 18k tri-colour gold panthere ring by Cartier from the Panthere collection. The ring is composed of a panthere head motif and is complemented with two round emeralds set a...
Category

Cartier Emerald For Sale on 1stDibs

Find the exact cartier emerald you’re shopping for in the variety available on 1stDibs. Each design created in this style — which was crafted with great care and often made from Gold, 18k Gold and Yellow Gold — can elevate any look. You can easily find a 801 antique edition and 304 modern creations to choose from as well. Making the right choice when shopping for a cartier emerald may mean carefully reviewing examples of this item dating from different eras — you can find an early iteration of this piece from the 19th Century and a newer version made as recently as the 21st Century, both of which have proven very popular over the years. For this particular accessory, there are many different carat weights to choose from, but .5 Carat and 1 Carat versions are of considerable interest. While most can agree that any cartier emerald from our collection can easily elevate most outfits, but the choice of a Emerald version from the 744 available is guaranteed to add a special touch to your ensemble. Today, if you’re looking for a round cut version of this piece and are unable to find the perfect match, our selection also includes emerald cut and mixed cut alternatives. There aren’t many items for men if you’re seeking a cartier emerald, as most of the options available are for women and unisex.

How Much is a Cartier Emerald?

Prices for a cartier emerald can differ depending upon size, time period and other attributes — at 1stDibs, these accessories begin at $895 and can go as high as $875,000, while this accessory, on average, fetches $15,376.