H 3 in. W 3 in. D 3 in.
La Dynastie Wolfers, De L'art Nouveau A L'art Deco Book
Located in London, GB
A beautifully produced and photographed book which deals with the Wolfers family and their business which opened in Brussels in 1812 and continues to flourish to this day. Probably t...
Category

H .75 in. W .63 in.
Lalique Masque De Femme Votive on Stand Clear Crystal
By René Lalique, Lalique
Located in New York, NY
Inspired by the famous Masque de Femme design originally produced as a panel for a fountain, this candleholder combines the purity of crystal, simplicity of line, and richness of det...
Category 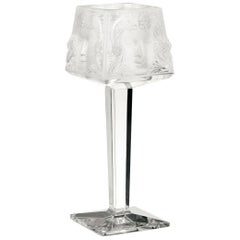 H 11.93 in. W 4.53 in. D 4.53 in.
Lalique Maison Black Laquer Bed Frame with Masque De Femme Crystal Panel Accents
Located in New York, NY
The Masque de Femme panel created by René Lalique in 1935 to adorn a fountain embodies the imaginative power of its creator who was fascinated by women and nature. Both classic and a...
Category 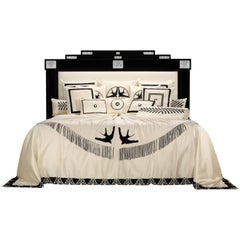 H 62.99 in. W 84.25 in. D 89.76 in.
Lalique Ivory Ash Console or Entryway Table with Masque de Femme Crystal Panel
By René Lalique
Located in New York, NY
The Masque de Femme panel created by René Lalique in 1935 to adorn a fountain embodies the imaginative power of its creator who was fascinated by women and nature. Both Classic and a...
Category 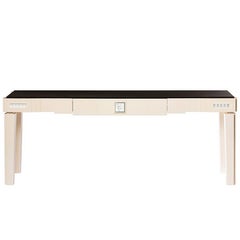 L 20.08 in.
Art Deco Bakelite Clamper watch in cream bakelite by De Vecchi
Located in Daylesford, Victoria
An Art Deco Clamper watch in a Cream Yellow Bakelite, by “De Vecchi” with a “17 Jewel” movement, as marked to the black metal face, with white hands and Arabic numerals, with a touc...
Category

H 16.54 in. Dm 6.7 in.
Art Deco Cabinet Marked by Henri van de Velde
By Henry van de Velde
Located in Antwerp, BE
Art Deco cabinet by Belgian master Henry van de Velde. As a Belgian painter, architect and interior designer. He is considered as one of the main founders and representatives ...
Category

H 48.43 in. W 43.31 in. D 17.72 in.
James de Wulf Concrete Deco Side Table
By James de Wulf
Located in Los Angeles, CA
Contemporary classic side table, inspired by the luxury of Art Deco styling. Made of solid concrete and brass. The concrete sets stability while the metal shines luxuriously. This ta...
Category

H 25 in. Dm 34 in.
'De Coene Frères Art Deco Ebonized and Glass Console'
By De Coene
Located in Stamford, CT
Elegant and useful black lacquer deco console with two 3/4" glass shelves. Brass inlay surround on the bottom of the piece. The perfect size for a foyer or as a side board.
Category

H 21.66 in. W 24.41 in. D 13.98 in.
Art Deco Sculpture Silvered Bronze Sculpture Birds on Swing De Roche France 1930
By De Roche
Located in Antwerp, BE
Art Deco sculpture in silvered bronze of two birds on a swing on a Belgian Black marble base. Signed by De Roche, France 1930.
Category

H 9 in. W 2.5 in. D 2.5 in.
"Shepherd and Shepherdess," Monumental Art Deco Sculptures, Probably by De Vegh
By Geza De Vegh
Located in Philadelphia, PA
Monumental and dignified, this pair of Art Deco sculptures depict a shepherd and shepherdess, crisply shaped and stylized like the best of 1930s public sculpture, and painted in rich...
Category

H 39.5 in. W 10.5 in. D 8.5 in.
"Abundance," Large and Rare Allegorical, Art Deco Sculpture by De Vegh
By Geza De Vegh
Located in Philadelphia, PA
An especially large and rare example of Geza De Vegh's stylized Art Deco sculpture, this figure of ‘Abundance’ is shown holding a sheaf of wheat in her lap, amidst layers of drapery....
Category

Art Deco Sculpture of a Man on the Lookout Jean de Roncourt, France, 1930

H 31.89 in. W 68.9 in. D 30.71 in.
"Greek Head," Art Deco Porcelain Vase in White and Gold by De Vegh, 1930s
By Geza De Vegh
Located in Philadelphia, PA
Striking and unique, this porcelain vase, glazed in a lovely white glaze highlighted in gold, depicts a male head wearing a harvest crown with spikes of wheat. Although dating from t...
Category

H 24.41 in. W 27.56 in. D 13.39 in.
Art Deco Vase with Relief of Woman's Head by De Vegh
By Geza De Vegh
Located in Philadelphia, PA
This very rare Art Deco porcelain vase was sculpted by a renowned ceramicist and painter -- Geza de Vegh -- and produced by Lamberton Scammell in Trenton, New Jersey. The company co...
Category

Deco De For Sale on 1stDibs

With a vast inventory of beautiful furniture at 1stDibs, we’ve got just the deco de you’re looking for. Each deco de for sale was constructed with extraordinary care, often using metal, fabric and glass. Find 678 options for an antique or vintage deco de now, or shop our selection of 156 modern versions for a more contemporary example of this long-cherished piece. There are many kinds of the deco de you’re looking for, from those produced as long ago as the 19th Century to those made as recently as the 21st Century. A deco de made by Art Deco designers — as well as those associated with Art Nouveau — is very popular. A well-made deco de has long been a part of the offerings for many furniture designers and manufacturers, but those produced by De Coene Frères, Faïenceries et Emaux de Longwy and René Lalique are consistently popular.

How Much is a Deco De?

A deco de can differ in price owing to various characteristics — the average selling price 1stDibs is $2,500, while the lowest priced sells for $74 and the highest can go for as much as $56,500.