H 29.75 in. W 56 in. D 18.5 in.
Schmieg & Kotzian Federal Mahogany and Crotch Grain Walnut Breakfront Bookcase
By Schmieg & Kotzian
Located in Swedesboro, NJ
This is a fine quality breakfront bookcase from one of America's finest manufacturers in our nation's history. This incredibly well made, crotch grain walnut and solid mahogany break...
Category

H 71.25 in. W 44 in. D 22 in.
1960s Oakwood Dresser with Dark Grain
Located in Amherst, NH
1960s solid oakwood dresser with a dark wood grain. The dresser has nine drawers for storage. It is fully refinished and the grain is beautiful! There are no marks. Excellent condition.
Category 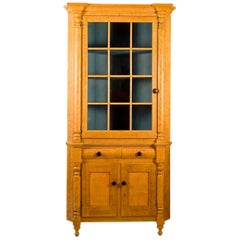 H 19 in. W 34.75 in. D 16.25 in.
Large 19th Century American Grain Painted Cupboard
Located in Hudson, NY
This impressive cupboard has a beautiful grain painted finish. Grand in scale with considerable storage capacity. There is a 5 inch "Step-back" on the upper level.
Category

H 50.75 in. W 48 in. D 21.75 in.
Jens Risom Rosewood Midcentury Dresser with Extraordinary Grain
By Jens Risom
Located in Philadelphia, PA
This beautiful dresser by Jens Risom has six drawers with solid rosewood handles and a wonderfully book-matched rosewood grained front and top. It has been totally refinished top to ...
Category

H 42 in. W 54.25 in. D 24.5 in.
Wonderfully Decorative Grain Painted Lowboy Chest by Harden
By Harden Furniture 1
Located in Hopewell, NJ
Eye-catching decorative lowboy with richly patterned grain painting that gives the impression of a mix of woods such as zebrawood, burl and ebonized accents. One long narrow drawer a...
Category

H 14 in. W 37.5 in. D 14 in.
Grain Painted Blanket Chest, Pennsylvania, circa 1835
Located in New York, NY
A dramatic piece to say the least, this painted jewel made of dense poplar and pine has a wonderful, early and complex grain painted surface created to resemble a highly figured rose...
Category

H 23.5 in. W 49.5 in. D 24.5 in.
Grained Rosewood Mirrored Back Carved Hall Stand Mann. Belter
Located in Swedesboro, NJ
Stand is faux grain with intricate design. Stand has marble base with mirrored back.
Category

H 24.02 in. W 63.78 in. D 6.89 in.
Dovetail Credenza in Vertical Grain Douglas Fir by Studio Moe
Located in Portland, OR
Master craftsmanship, timeless design. Made from solid wood vertical grain douglas fir, this elegant credenza will bring warmth and serenity to the space it lives in. Soft close door...
Category

H 33 in. W 39 in. D 25 in.
French Faux Grain Painted Chest of Drawers or Commode
Located in Hopewell, NJ
A beautiful French antique chest of drawers masterfully faux grain painted to look like wood. Handsome black decorative borders on top and around drawers as well as original wooden k...
Category

H 31.75 in. W 43.25 in. D 23.5 in.
Faux Grain and Hand-Painted Three-Drawer Chest of Drawers
Located in WEST PALM BEACH, FL
This stunning hand-painted three-drawer chest is a perfect accent for a sophisticated interior. A hand-painted finish of faux grain wood, cream boarder and delicate sprays of flowers...
Category

21st Century and Contemporary American Other Commodes and Chests of Drawers

H 38 in. W 61 in. D 25 in.
Original Early 1800's Antique Faux Grained Painted Pine 3 Drawer Commode
Located in Chicago, IL
Our buyers keen eye has done it once again, she unearthed this fine antique pine, painted and faux grained 3 drawer commode from under a stack of other furniture. This fine commode d...
Category

H 35 in. W 42.25 in. D 20.25 in.
Lancaster County American Empire Faux-Grained Chest of Drawers, circa 1830
Located in Miami, FL
From Lancaster county Pennsylvania, this American Empire chest features an outstanding original faux bois finish with painted tooling and graining on the front and sides. Top is pain...
Category

H 61 in. W 88 in. D 24 in.
1950s Grain Printed Butterick Pattern Cabinet
Located in Garnerville, NY
Quarter sawn oak printed metal cabinet for Butterick patterns. My Mom sewed a lot of my sister's clothing when we were children. I remember going to the fabric store where she would ...
Category

H 34.5 in. W 84 in. D 20 in.
Italian Baroque Style Grain Painted and Ebonized Four-Door Cabinets, Pair
Located in Atlanta, GA
The pair of unique in their shallow dimensions, having rectangular tops above frames housing shelving and with raised paneled locking doors lined in wire, raised on bracket feet, 19t...
Category

H 61 in. W 88 in. D 24 in.
19th Century Carved Grain Chest
Located in Los Angeles, CA
19th c. carved grain chest on contemporary iron base. Front drops down and there is a shelf inside. Dovetailed throughout and each of the six sides are constructed of one wide board....
Category

Grain Cabinet For Sale on 1stDibs

At 1stDibs, there are many versions of the ideal grain cabinet for your home. A grain cabinet — often made from wood, softwood and pine — can elevate any home. Find 31 options for an antique or vintage grain cabinet now, or shop our selection of 1 modern versions for a more contemporary example of this long-cherished piece. There are many kinds of the grain cabinet you’re looking for, from those produced as long ago as the 18th Century to those made as recently as the 21st Century. A grain cabinet made by Art Deco designers — as well as those associated with Mid-Century Modern — is very popular. You’ll likely find more than one grain cabinet that is appealing in its simplicity, but Harden Furniture, Heal's and Lew Hudnall produced versions that are worth a look.

How Much is a Grain Cabinet?