1950s Tiffany & Co. Aquamarine Platinum Cocktail Ring
By Tiffany & Co.
Located in Greenwich, CT
The magical aquamarine gemstone was named for the Latin phrase "water of the sea" and this enchanting Tiffany & Co., circa 1955, cocktail ring is as clear and blue as the most exotic...
Category 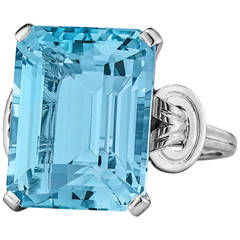 H .43 in. W 0.81 in. L 1.06 in.
Tiffany & Co. Aquamarine Ring, 5.00 Carat
By Tiffany & Co.
Located in New Orleans, LA
An exceptional aquamarine weighing approximately 5.00 carats is the star of this ring by Tiffany & Co. Sparkling with a rare Santa Maria blue hue, the gem is beautifully on display i...
Category

Tiffany & Co. 15 Carat Aquamarine Diamond Ring
By Tiffany & Co.
Located in New Orleans, LA
An exceptional emerald-cut aquamarine weighing approximately 15.00 carats is the star of this outstanding ring by Tiffany &amp; Co. Sparkling with a pure ocean-blue hue, the gem is b...
Category

Free Shipping
W 0.5 in.
Tiffany & Co. Paloma Picasso Gemstone Gold Ring
By Paloma Picasso for Tiffany & Co.
Located in Beverly Hills, CA
Creativity runs through the veins of each creation orchestrated by Paloma. Featuring a dynamic display of color and design that puts a smile on any eyes that dare to look. Crafted wi...
Category

On 1stDibs, there are many options to choose from in our inventory of tiffany aquamarine rings. Frequently made of Platinum, Gold and 18k Gold, these items were constructed with great care. Find a collection of 38 vintage versions or 26 modern creations for a more contemporary example of these cherished accessories. Our inventory is broad and distinctive, with accessories on offer that were made as long ago as the 20th Century to those produced as recently as the 21st Century. The designs in our inventory of tiffany aquamarine rings bearing Modern or Contemporary hallmarks are very popular. There have been many well-made iterations of these items over the years, but those made by Tiffany & Co., Paloma Picasso for Tiffany & Co. and Jean Schlumberger for Tiffany & Co. are often thought to be among the most beautiful. Today, if you’re looking for round cut tiffany aquamarine rings and are unable to find the perfect match, our selection also includes emerald cut and marquise cut alternatives. If you’re browsing the variety of tiffany aquamarine rings for sale, you’ll find that many are available today for women, but there are still pieces to choose from for men.

How Much are Tiffany Aquamarine Rings?

On average, tiffany aquamarine rings at 1stDibs sell for $6,895, while they’re typically $750 on the low end and $48,000 for the highest priced versions of this item.

Tiffany's furniture is available for sale on 1stDibs. These distinctive objects are frequently made of metal and designed with extraordinary care. There are many options in our Tiffany & Co. Furniture collection, although beige editions of this piece are particularly popular. In-stock we have 1 vintage editions of these items, while there is also 0 modern edition to choose from. Tiffany's furniture prices can vary depending upon size, time period and other attributes. Price for these items starts at $7,500 and tops out at $7,500, while pieces like these can sell for $7,500 on average.
Questions About Tiffany Aquamarine Rings
Prices for most tiffany aquamarine rings on 1stdibs are negotiable. You’ll see a "Make an Offer" button on the item details page, indicating that the seller is willing to consider a lower price. It’s not uncommon for customers to get 15–25% off the list price after negotiating. See our tips for negotiating like a pro.
Only experienced, professional sellers who have applied and been thoroughly vetted by our team of experts can sell tiffany aquamarine rings and other quality items on our site. Learn more about becoming a 1stdibs seller.
The 1stdibs Buyer Protection Guarantee provides coverage for qualified purchases in the unlikely event that the item arrives not as described or is damaged. We’ll work with you and the seller to find a resolution, ensuring your satisfaction. View details
We have partnerships with the world's best shipping providers to facilitate seamless and fully-insured delivery from the seller's location directly to you, wherever you are in the world. Our logistics team is comprised of dedicated members who arrange all the details with our partners, servicing and supporting all shipments. Learn more about shipping on 1stdibs.
For your convenience, we offer multiple payment methods, including all major credit cards and PayPal. For many purchases we also offer financing options or wire transfer. Learn more about payment options on 1stdibs.