H 11.5 in. Dm 14 in.
Mid-Century Modernist Handblown Smoked Tourmaline / Cinnabar Murano Glass Vase
Located in New York, NY
This gorgeous textured handblown Murano glass vase is a rich smoked tourmaline with swirls of cinnabar. It is a great accent piece or wonderful to add to a glass collection. It is in...
Category

H 11.25 in. W 4 in. D 4 in.
Mid-Century Modernist Murano Clear Vase with Red, Orange, Yellow and Grey Bands
By Murano 5
Located in New York, NY
A very beautiful example of 1970s chic is shown in this piece of Italian glasswork. The clean shape of the clear vase contrasts nicely with abstract bands of bright red, orange, yell...
Category

H 16 in. Dm 7.5 in.
Modernist Green Teardrop Vase by Per Lütken for Holmegaard, 1960s
By Per Lütken
Located in Esbjerg, DK
A 1960s Holmegaard Per Lutken 'May' green teardrop shaped vase, signed to base 'Holmegaard', numbered and with Per Lütken initials.
Category

Modernist Green Teardrop Vase by Per Lütken for Holmegaard, 1960s

H 8.5 in. Dm 2 in.
Gorgeous Mid-Century Modernist Elliptical Chartreuse Murano Vase
By Murano 5
Located in New York, NY
A beautiful piece of Mid-Century Modernist Murano glass in a lovely chartreuse color, with a rich fuchsia interior. A piece that truly stands on its own, but can also hold a large fl...
Category

How Much is a Vase Blown Glass Mid Century Modernist?

A vase blown glass mid century modernist can differ in price owing to various characteristics — the average selling price 1stDibs is $745, while the lowest priced sells for $246 and the highest can go for as much as $3,475. 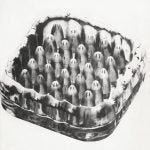