H 29 in. Dm 23 in.
6 Lights Stilnovo Chandelier
By Stilnovo
Located in Catania, IT
Chandelier from the 1950s, 6 lights, attributed to the manufacturer Stilnovo.
Category

H 34 in. W 43.5 in. D 8 in.
Attributed to Stilnovo Chandelier
By Stilnovo
Located in London, GB
Attributed Stilnovo chandelier with 12 lights in perfect conditions.
Category 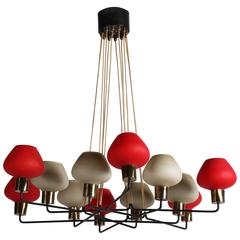 H 52 in. Dm 9.5 in.
Midcentury Attributed to Stilnovo Chandelier
By Stilnovo
Located in Miami, FL
Very pure lines and design for this Italian chandelier from the 1960s. Glass crown around and above in the central upper part. 12 lamps give a very good lightening.
Category

H 31.5 in. Dm 11.82 in.
Stilnovo Chandelier Model 1231 in Copper
By Stilnovo
Located in Waalwijk, NL
Stilnovo, pendant model 1231, copper, Italy, 1960s This Stilnovo pendant has the shape of a 'beehive' and is build out of several layers. Due to the shades position and shape the...
Category

H 39.25 in. Dm 48 in.
Vintage Stilnovo Chandelier Six Arms Italian, 1960s
By Stilnovo
Located in Verviers, BE
Six arms chandelier Stilnovo. Photography fails to capture the simple elegant illumination provided by this lamp. Recently cleaned and polished so that it in excellent condition ...
Category

H 25.98 in. Dm 38.58 in.
Stilnovo Chandelier Model 1231 in White Metal
By Stilnovo
Located in Waalwijk, NL
Stilnovo, pendant model 1231, white lacquered metal, Italy, 1960s This Stilnovo pendant has the shape of a 'beehive' and is build out of several layers. Due to the shades position a...
Category

H 31.5 in. Dm 31.5 in.
Stilnovo Chandelier in Brass and Murano Glass
By Stilnovo
Located in West Palm Beach, FL
This stylish and chic chandelier dates to the 1950s-1960s and was created by Stilnovo. The piece takes on the motif of rice paper lanterns. Fabricated in Murano glass. Note: T...
Category

H 44.49 in. Dm 17.72 in.
Stilnovo Chandelier Brass and Glass, Italy, 1960
By Stilnovo
Located in Roosendaal, Noord Brabant
Very nice and impressive large chandelier designed and manufactured by Stilnovo, Italy 1960. This is for a very nice modernist shaped chandelier with brass shades and milk glass diff...
Category

H 39.5 in. Dm 26.75 in.
Stilnovo 3 Lights Chandelier
By Stilnovo
Located in Catania, IT
Chandelier 3 lights 1960s in perfect style of the Italian design of the time attributable to the Stilnovo company.
Category

Stilnovo Chandelier 5 For Sale on 1stDibs

How Much are Stilnovo Chandelier 5?