Herbert Dicksee was an English painter, born in 1862, who specialised in oil paintings of dogs, particularly, the deerhound. Prints and etchings of his best-known paintings were widely distributed by renowned publishers, such as Klackner of London and his work is popular among collectors and dog enthusiasts even today. He belonged to an illustrious artistic family. His father was the famous artist, John Dicksee. Herbert studied art at the Slade School, in London, on a scholarship. His first painting was exhibited in 1881.

He specialized in sympathetic paintings of hounds, including After Chevy Chase and Silent Sympathy. Herbert also painted big cats at the London Zoo, of which he was a fellow. His paintings were usually inspired from life and he kept numerous dogs as pets. Those pets featured in his etchings, including a bloodhound, a French bulldog named Shaver and several pugs and bull terriers.

Many of Herbert's works, especially those painted during the war, depict the dogs accompanying melancholy young ladies. His most frequent model was the famous actress, Gladys Cooper. 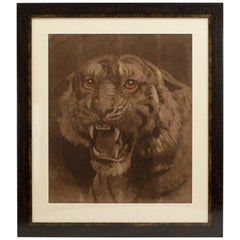 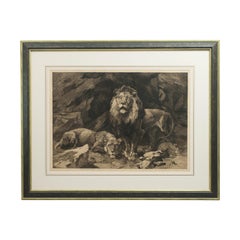 Antique Black and White Etching with Tigers by Herbert Dicksee, the Destroyers

H 29.5 in. W 39.25 in. D 1 in.
Herbert Dicksee Tiger Engraving, 'The Watcher on the hill', 1904 Frost and Reed
By Herbert Dicksee 2
Located in Oxfordshire, GB
A wonderful wildlife etching of a tiger by Herbert Dicksee. The framed picture shows a tiger crouching on some rocks overlooking the open grassland below. The powerful etching is aft...
Category

Herbert Dicksee Tiger Engraving, 'The Watcher on the hill', 1904 Frost and Reed

H 31.3 in. W 40.36 in. D 1.97 in.
Herbert Dicksee Lion Etching, 'The Alarm'
By Herbert Dicksee 2
Located in Oxfordshire, GB
A framed black and white image of a family of lions. The lion and lioness are at the mouth of their cave, the lioness has a cub in her mouth, both looking out with concerned faces. T...
Category

H 28.55 in. W 39.18 in. D 1.58 in.
Destroyers, Tiger Etching, Herbert Dicksee
By Herbert Dicksee 2
Located in Oxfordshire, GB
A wonderful etching of two tigers by Herbert Dicksee. A framed wildlife picture of a pair of tigers crouching on some rocks overlooking the open grassland below. The powerful etchin...
Category

H 21.26 in. W 32.29 in. D 0.04 in.
Herbert Dicksee Etching of Lions, Peace
By Herbert Dicksee 2
Located in Oxfordshire, GB
Lion etching, peace. A great powerful framed image of a lioness with her two cubs on the riverbank drinking from the river. The wildlife etching is after the original by Herbert Dic...
Category

Original Engravings of Herbert Dicksee's Lion and Tiger, Hand-Colored circa 1930

Furniture by Herbert Dicksee are available for sale on 1stDibs. These unique items are often made from Paper, and are designed with extraordinary care. There are many options in our Herbert Dicksee Furniture collection, although gray editions of this piece are particularly popular. In-stock we have 4 vintage editions of these items, while there is also 0 modern edition to choose from. If you are looking for additional options, many customers also consider furniture by Archibald Thorburn, Douglas Adams and Cecil Aldin. Prices for Herbert Dicksee furniture can vary depending on size, time period and other attributes. The price for these items starts at $904 and tops out at $2,294, while pieces like these can sell for $2,086 on average.