Hilda Belcher was an American artist known for her paintings, watercolors, portraits and illustrations depicting individuals and landscapes, both in formal portraiture and in casual scenes of children and daily life. Born in Pittsford, Vermont, in 1881, Belcher was the oldest child of Martha Wood Belcher, an artist, and Stephen Paterson Belcher, a manufacturer of stained glass. When she was a teenager, the family relocated to Newark, New Jersey, but retained their home in Vermont. Belcher graduated from Newark High School in 1900. She later moved to New York City, where she attended the New York School of Art. Belcher studied with William Merritt Chase, Kenneth Hayes Miller, George Bellows and Robert Henri. She also attended the Art Students League of New York, where she later taught from 1910–12 and again from 1918–21. Belcher was the second woman to be accepted into the National Academy of Design. In 1935, Anne Miller Downes, a reviewer for The New York Times, called Belcher one of the most distinguished women artists in America. 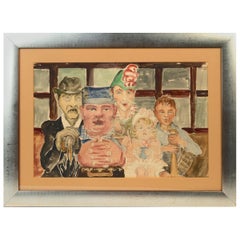 "My Family" a Watercolor by Helen Haselton 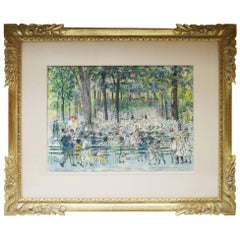 "Concert in Central Park" a Watercolor by Carle Michel Boog

Series of Four William Goodall Watercolor Paintings of Birds, circa 1790

Pair of Still Lifes, Gouache after Paul LeLong and Both Initialed "A.G."

Furniture by Hilda Belcher are available for sale on 1stDibs. These distinctive objects are frequently made of paper and designed with extraordinary care. There are many options in our Hilda Belcher furniture collection, although beige editions of this piece are particularly popular. If you are looking for additional options, many customers also consider Furniture by Jorge Fick Furniture, John B. Lear Furniture and Raphael Soyer Furniture. Prices for Hilda Belcher furniture may vary depending on size, time period and other attributes. The price for these items starts at $3,250 and tops out at $3,250, while pieces like these can sell for $3,250 on average.