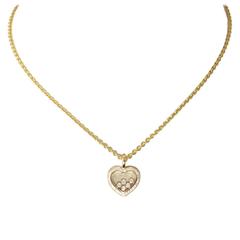 Free Shipping
Chopard Happy Diamonds 18 Karat Heart Ring
By Chopard
Located in Houston, TX
18K yellow gold ring marked "Chopard 750". It is from the Happy Diamonds collection and features two hearts on top with floating diamonds. There are a total of 116 round diamonds w...
Category

Chopard Happy Diamonds Heart Bracelet 85A054/0001
By Chopard
Located in Wilmington, DE
At the very heart of Chopard's women's jewellery collection, the Happy Diamonds Icons line is as unique as it is playful. Inspired by sparkling drops of water in a waterfall, the fre...
Category

Chopard Happy Hearts Link Bracelet
By Chopard
Located in Bishop's Stortford, Hertfordshire
This bracelet by Chopard is from their Happy Hearts collection and features 5 floating diamonds within sapphire crystals, made in 18ct yellow gold. This bracelet has a secure push ov...
Category

Free Shipping
L 7.49 in.
Chopard ‘So Happy Heart’ Aquamarine and Diamond Bracelet
By Chopard
Located in London, GB
From the hugely popular 'So Happy Heart' collection by Chopard, this bracelet features a collection of little round brilliant diamonds set within a heart shaped aquamarine stone. The...
Category

Chopard Happy Diamond Heart Bangle 857482/5503
By Chopard
Located in Wilmington, DE
18k rose gold shines with a pair of elegant hearts: a large blue stone heart at one end and a small heart housing one of Chopard celebrated moving diamonds at the other, in a sparkl...
Category

Chopard Happy Diamond Heart Pendent 799203-5001
By Chopard
Located in Wilmington, DE
At the very heart of Chopard's women's jewellery line, the Happy Curves line is as original as it is timeless. Inspired by sparkling drops of water in a waterfall, the freely moving ...
Category

Chopard Heart Shape 0.40 Carat Diamond Love White Gold Band Ring
By Chopard
Located in London, GB
The LOVE Chopard ring. This ring has the word LOVE engraved and set in place with diamonds. The letter O is an approximate 0,40ct heart shape diamond. There is an approximate total c...
Category

Free Shipping
Chopard Happy Diamonds 18 Karat White Gold Diamond Heart Pendant Necklace
By Chopard
Located in Southampton, PA
The Chopard “Happy Diamonds” necklace is made of 18K white gold and embellished with a dancing diamond. The necklace weighs 19.2 grams and boasts a 16” chain and a heart pendant that...
Category

Free Shipping
W 12.5 in. D 4 in. L 11 in.
Chopard Happy Diamonds 18 Karat White Gold Floating Diamond Heart Earrings
By Chopard
Located in Southampton, PA
The Chopard “Happy Diamonds” heart earrings are made of 18K white gold and embellished with two floating diamonds. The earrings measure 0.30” in length and 0.30” in width. The pair...
Category

Chopard Happy Diamonds Happy Heart Bracelet 85A054/1201
By Chopard
Located in Wilmington, DE
Happy Diamonds Icons is as unique as it is playful. The dancing diamonds are entirely free between two sapphire crystals, thus enabling them to move without restraint, and through th...
Category

Chopard Happy Diamond Icons Heart Ring 82A054/1112
By Chopard
Located in Wilmington, DE
Happy Diamonds Icons is as unique as it is playful. The dancing diamonds are entirely free between two sapphire crystals, thus enabling them to move without restraint, and through th...
Category

On 1stDibs, you can find the most appropriate diamond heart chopard for your needs in our varied inventory. Every item for sale was constructed with extraordinary care, often using Gold, 18k Gold and White Gold. You can easily find a 23 antique edition and 74 modern creations to choose from as well. If you’re looking for a diamond heart chopard from a specific time period, our collection is diverse and broad-ranging, and you’ll find at least one that dates back to the 20th Century while another version may have been produced as recently as the 21st Century. A diamond heart chopard of any era or style can lend versatility to your look, but a version featuring Diamond, from our inventory of 64, is particularly popular. A round cut version of this piece has appeal, but there are also brilliant cut and heart cut versions for sale. If you’re browsing our inventory for a diamond heart chopard, you’ll find that many are available today for women, but there are still pieces to choose from for unisex and men.

How Much is a Diamond Heart Chopard?

Find a wide range of Chopard watches, necklaces, rings and other jewelry on 1stDibs.