Gustave Baumann was born in Magdeburg, Germany, on June 27, 1881. Baumann immigrated to the USA as a child. He grew up in Chicago but became curious about New Mexico. He visited friends there in 1917 and settled in Santa Fe in 1918. He spent over 50 years there, where he participated in the art community. He created woodblocks from which he made prints and also became a carver of saints and marionettes, working with the Marionette Theatre. Baumann also created numerous paintings in bright colors. His woodcut subjects are church figures, scenes of sacred Indian pictographs and landscapes, including the Grand Canyon. During the 1930s, Baumann was a Works Progress Administration co-ordinator for Santa Fe. He died in Santa Fe on October 8, 1971. 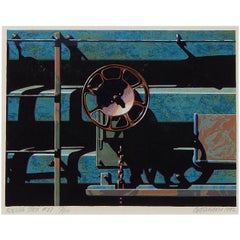 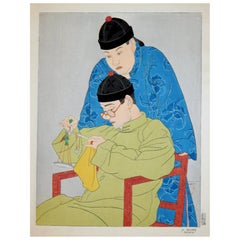 Gustave Baumann Furniture is available on 1stDibs for sale. If you are looking for additional options, many customers also consider furniture by Dale Chihuly Furniture, Furniture and Michael Wilson Furniture. Prices for Gustave Baumann furniture may vary depending upon size, time period and other attributes.