Hans Heinrich Bebie was born in Switzerland around 1800. His early life and career remain a mystery, but he may be the Heinrich Bebi who was born in Kempten, Switzerland, in 1803, taught drawing and painting in Zurich, and exhibited there from 1832 to 1838. He may also have exhibited in Berlin in 1826. Bebie arrived in Richmond, Virginia, in 1842, moved to Wheeling, Virginia, and settled in Baltimore in 1846, calling himself Henry Bebie. He first exhibited his work at the Maryland Historical Society in 1849, and he became one of the leading portraitists in Baltimore until his death in 1888. Single and paired portraits dominate his work, but he also painted group portraits and a handful of genre scenes. His highly detailed and meticulously rendered paintings are thought to indicate his training as a miniaturist. Bebie is best known today for a small number of genre scenes that probably depict the luxurious interiors of upper-class brothels. Works such as Young Ladies in an Interior (Baltimore Museum of Art) and Portrait of a Lady (Walters Art Museum, Baltimore) show fashionably dressed women preening and standing idly by and sometimes include a small number of gentlemen visitors. Bebie’s other genre scenes include groups of figures in various town and country settings, with a particular focus on the family. Bebie exhibited at the Maryland Historical Society, Baltimore; and the Reading Academy, Pennsylvania. His work can be found in the collections of the Maryland Historical Society, Baltimore Museum of Art, Greenville County Museum of Art, South Carolina; and the Peabody Essex Museum, Salem, Massachusetts. 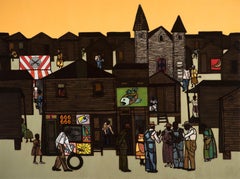 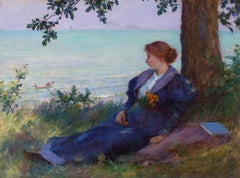 Full Length Portrait of a Young Boy with His Dog
By Joseph Whiting Stock
Located in Bedford, NY
Category

A Portrait of Jeanette Payne
By Ammi Phillips
Located in Bedford, NY
Category

Scene in a Bar-Room
By Richard Caton Woodville
Located in Bedford, NY
Category

By the Window
By Edward Dufner
Located in Bedford, NY
Category