Free Shipping
W 0.88 in.
Van Cleef & Arpels Diamond Earrings
By Van Cleef & Arpels
Located in Darnestown, MD
Van Cleef and Arpels pear shaped diamond earrings that are the ultimate in elegant simplicity. The earrings are made of 154 diamonds with a total weight of approximately 7 carats. T...
Category 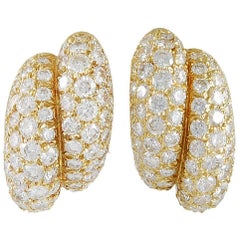 Free Shipping
W 0.75 in. L 2.25 in.
Van Cleef & Arpels Diamond and Gold Hoop Earrings
By Van Cleef & Arpels
Located in New York, NY
A beautiful and chic pair of yellow gold and diamond hoop earrings by Van Cleef and Arpels. The earrings have a total diamond weight of 1.82 carats and measure one-inch in length. Th...
Category

Free Shipping
W 0.62 in. L 0.59 in.
Van Cleef & Arpels Diamond Cluster Platinum Earrings
By Van Cleef & Arpels
Located in Greenwich, CT
Van Cleef & Arpels has long established itself in the world of designer jewelry. And this Classic pair of Diamond cluster earrings is just perfect to showcase the beauty of the Diamo...
Category

How Much are Van Cleef Diamond Earrings?

Find an exquisite collection of Van Cleef & Arpels bracelets, necklaces, earrings and other accessories on 1stDibs.