James Caldwell was a Presbyterian minister who played a prominent part in the American Revolution. Caldwell was born in Cub Creek in Charlotte County, Province of Virginia, the seventh son of John and Margaret Caldwell, who were Scots-Irish settlers, and traced their ancestry to Huguenots who fled France to Scotland in the 16th century, established Caldwell Castle and later defended the Ulster Plantation and Derry. Caldwell graduated from the College of New Jersey (later called Princeton University) in 1759 and, although he inherited 500 acres in Cub Creek, chose to become pastor of the Presbyterian Church in Elizabethtown, New Jersey. He was an active partisan on the side of the Patriots, and was known as the Fighting Parson. His church and his house were burned by Loyalists in 1780.  Caldwell, who fought in the Battle of Springfield, was killed on November 24, 1781, by an American sentry in Elizabethtown, New Jersey, when he refused to have a package inspected. 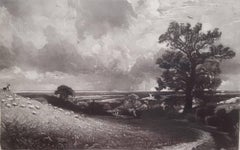 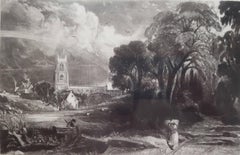 Landing of the Eneas
By Richard Earlom
Located in Saint Augustine, FL
Category

Richard Earlom
Landing of the Eneas, 1803