A 20th-century romantic, Ross Braught felt a life force coursing through all of creation. Like an artful Prospero, he celebrated the strange and wild and transformed the ordinary into mesmerizing wonder. Born in Carlisle, Braught attended the Pennsylvania Academy of Fine Art, studying with Daniel Garber. Winning academic approval, he was awarded the William Emlen Cresson Memorial Travelling Scholarship, which allowed him to visit England and Italy. In the twenties, he exhibited regularly at the Pennsylvania Academy, the National Academy of Design, the Corcoran Gallery and the Society of Independent Artists. Braught married in 1923 and the couple settled in Upper Black Eddy, a tiny town on Upper Delaware. Moving to Woodstock, in 1928, Braught pursued his emerging interest in lithography. As the decade grew to a close, his paintings increased in size and the motif of branching trees became a strong design element. During the Woodstock period, he began to explore the expressive possibilities of pictorial space with an elevated perspective and compressed focus. Facing debt, Braught accepted a position at the Kansas City Art Institute as head of painting in 1931. During the summers, he traveled to the Dakota Badlands, the Grand Canyon and the Colorado Rockies and the western spaces inspired more adventurous artistic compositions, in which landscape forms were highly stylized. When Braught turned to figural works, he now orchestrated rhythmic compositions of organic shapes. The masterwork of this phase of Braught's art is the 27-foot mural, Mnemosyne and the Four Muses, at the top of the Grand Staircase of the Kansas City Music Hall. The Braughts traveled to Tortola in the British Virgin Islands for the first time in 1936. After a three-year stint teaching at Cornell, the artist moved to the island with his family in 1939, where they took up residence in a hotel for the next seven years. The island, its jungles and its people, provided a deep well of inspiration for Braught as the exotic pushed him to find new means of expression. Due to shortages because of the war, Braught took to drawing with his children's pencils. The resulting works are testimony to his capacity to create infinitely complex works with such a simple tool and verification of Thomas Hart Benton's assertion that Braught was the greatest draughtsman of his age. His affinity for twisting tree branches now explored into intricate mazes of jungle growth, “The agitated movement of plants forms gave forth so much life and vitality that the utter lack of air currents and the breathlessness of atmosphere is a realization that comes as an afterthought”. After the war, Braught returned to teach at the Kansas City Art Institute, where he stayed until 1962. As an instructor, he encouraged his students to be bold colorists. In his work, he transplanted natural forms to the studio. In these late paintings, his spatial configurations became increasingly elaborate with tricky perspectives and reflections. These playful compositions, which hover between abstract design and illusion, anticipate post-modern works of later decades. With a reorganization of the Kansas City Art Institute, Braught returned to Philadelphia. It is believed that his wife may have had Alzheimer's, but the only communication from him was sending some pieces to the Institute in the early 60s. After a successful career as an artist and educator, Ross Braught disappeared from view for the last two decades of his life, leaving only a post office box as a contact. Yet no one was able to track down the mysterious figure and thus his life's work became the source of legend rather than of history. In a way, this was fitting for an artist who portrayed ancient myths and saw their resonance in nature. In 2000, Hirschl and Adler, New York organized the exhibition, “Ross Braught: A Visual Diary”, which cast the spotlight on the artist once again. 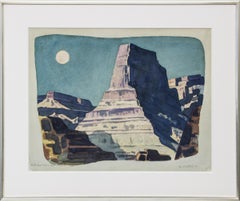 Madonna of the Picture
By Howard Schleeter
Located in Denver, CO
Category

Louise Ronnebeck
Untitled (WPA Era Colorado Landscape with Mine), circa 1935

The Oracles Decree All Men Are Equal
By Edward Marecak
Located in Denver, CO
Category

Edward Marecak
The Oracles Decree All Men Are Equal, 1968