James McConnell Anderson was born on August 9, 1907, in New Orleans. He was also known as Mac. Anderson was sent to military boarding school in Chattanooga, Tennessee, and he later attended Tulane School of Architecture, Tulane University, from 1926–28. In 1928, Anderson’s brother Peter opened the Shearwater Pottery Factory in Ocean Springs, Mississippi, and in 1929, he and his brother Walter built an annex next to Peter’s factory. In 1930, the duo began working at the Annex, where Mac made molds, fired the products and oversaw the production of Shearwater. Anderson married Sara Lemon (1910–2007) in 1946 in Ocean Springs, who continued to work with him in the Annex. In addition to the creation of pottery, he produced wood sculptures, woodcarvings, paintings, watercolors, oil paintings on Masonite and woodcut designs for fabrics and paper. Anderson painted and decorated pottery prolifically until he died in 1998. 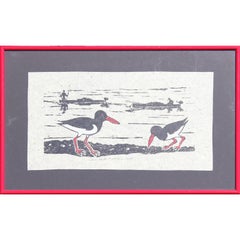 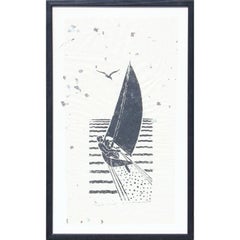 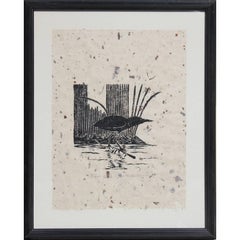 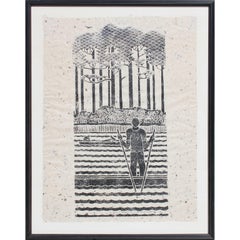 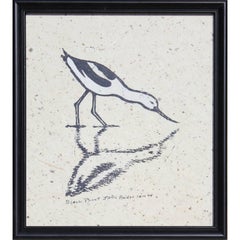 Woodblock Print with a Cat and Birds in a Field
Located in Houston, TX
Category

in-the-style-of-kunihiro-amano
Woodblock Print with a Cat and Birds in a Field, 20th Century

Previously Available Items
Mockingbird in Yaupon Block Print
By James McConnell (Mac) Anderson
Located in Houston, TX
Graphic woodblock print by James Mac Anderson in 1994 of a mockingbird in a yaupon holly bush, a plant native to southeastern North America. The basic shapes of the bird stand out ag...
Category

H 19.75 in. W 25.5 in. D 1 in.
Flounderers Block Print
By James McConnell (Mac) Anderson
Located in Houston, TX
Celebration of indigenous cultures and their fishing practices by James Mac Anderson in 1993. Signed and dated by artist and in a black frame. Artist Biography: James McConnell “M...
Category