Cartier Ellipse Ruby Emerald Sapphire Gold Stacking Rings
By Cartier
Located in Greenwich, CT
These three separate Cartier Ellipse rings will always and forever be stacked in your favor! Each 18 karat yellow gold band is highlighted with either an oval emerald, ruby, or sapp...
Category 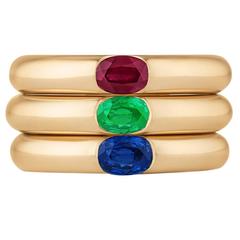 Cartier Ellipse Sapphire Yellow Gold Ring
By Cartier
Located in Dallas, TX
This is a beautiful 18k yellow gold ring a part of The Ellipse collection featuring apx. 0.5 carat sapphire. It is stamped 750, Cartier, and 1992. The ring is a size 7 with a total w...
Category

Cartier Ellipse Ruby and Gold Ring
By Cartier
Located in London, GB
An 18k yellow gold ruby ring from the Cartier Ellipse collection. The ring is set to the centre with a rub-over set 0.50ct oval cut ruby of which disperses a rich intense red hue thr...
Category

Cartier Large Ellipse Citrine Gold Ring
By Cartier
Located in Beverly Hills, CA
The elegance of Cartier shines through with this citrine and 18k yellow gold ring. Featuring a beautifully faceted golden colored citrine that is invisibly set into the wide tapered ...
Category

Cartier Ellipse Garnet Yellow Gold Band Ring
By Cartier
Located in London, GB
This bold ring from the Ellipse collection is made in 18kt yellow gold. It is set with a luscious garnet, weighing approximately 2ct. It is in very good condition. The gold is smooth...
Category

Cartier Ellipse 18 Karat Yellow and White Gold Diamond Ring
By Cartier
Located in Southampton, PA
The alluring sheen of 18K yellow gold is wonderfully accentuated by the cool gleam of 18K white gold in this exquisite ring that is created by Cartier for the stunning “Ellipse” coll...
Category

Cartier Ruby Ellipse Ring
By Cartier
Located in London, GB
Cartier Ruby from the "Ellipse Deux Tetes Croisees" collection. The ring is set in 18k yellow gold with a fine polished finish with a thick round band with an open arch front and sl...
Category

Cartier 18 Karat Yellow Gold Ellipse Diamond Ring 0.25 Carat
By Cartier
Located in MIAMI, FL
This Cartier Ellipse ring is a true masterpiece. Crafted in 18k yellow gold and fully hallmarked from the designer this simplistic design is stunning. The ring is bezel set with a ....
Category

You are likely to find exactly the cartier ellipse ring you’re looking for on 1stDibs, as there is a broad range for sale. Each design created in this style — which was crafted with great care and often made from Gold, 18k Gold and Yellow Gold — can elevate any look. Our collection of these items for sale includes 70 vintage editions and 10 modern creations to choose from as well. You’re likely to find the perfect cartier ellipse ring among the distinctive items we have available, which includes versions made as long ago as the 20th Century as well as those produced as recently as the 21st Century. As it relates to this specific piece, our collection includes designs that are universally popular, but carat weights, specifically, are sought with frequency. While most can agree that any cartier ellipse ring from our collection can easily elevate most outfits, but the choice of a Ruby version from the 21 available is guaranteed to add a special touch to your ensemble. Today, if you’re looking for an oval cut version of this piece and are unable to find the perfect match, our selection also includes round cut and mixed cut alternatives. When shopping for a cartier ellipse ring, you’ll find that there are less available pieces for unisex or men today than there are for women.

How Much is a Cartier Ellipse Ring?

Prices for a cartier ellipse ring can differ depending upon size, time period and other attributes — at 1stDibs, these accessories begin at $1,095 and can go as high as $5,585, while this accessory, on average, fetches $2,267.